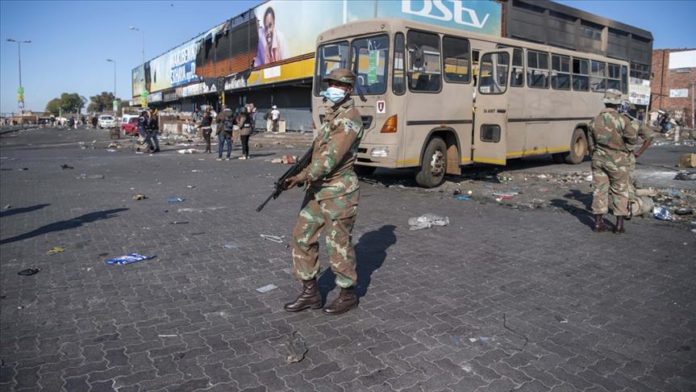 The King of the Zulu nation, South Africa’s largest ethnic group, asked his tribespeople on Wednesday to refrain from violence and looting after days of widespread riots in the country.

“I appeal to you, my father’s people, the Zulu nation, to withdraw from the destruction of our nation, South Africa. I appeal for calm and peace to be restored,” King Misuzulu Zulu said in a televised speech.

Violent riots and looting broke out last Thursday in the eastern province of KwaZulu-Natal, which falls under the king’s jurisdiction, over the imprisonment of former President Jacob Zuma.

The protests then spread to Johannesburg, where major shopping venues have been ransacked and some set on fire.

King Zulu said violence and looting was not the right way to express disappointment for Zuma’s imprisonment.

Zuma, 79, started serving a prison term for contempt of court in KwaZulu-Natal on Wednesday night.

“The looting has brought us shame as fingers are pointed towards us, my father’s people (Zulu nation),” the king said.

Zulu added that poverty and unemployment could be the cause of the looting, but appealed to his followers to refrain.

“This chaos is destroying our country’s economy and the poor and vulnerable will be most affected. We will go hungry as trucks don’t deliver food,” he said.

The monarch, who is widely respected among 11 million Zulus in the country, said vital supply chains have been damaged and that South Africans would suffer the consequences.

“It will be our own families that will suffer. My father’s people are committing suicide. Our nation is respected all over the world … let’s stop the violence,” he appealed.

“Let’s not allow politics to taint our nation, we are much better than this. We are people of dignity.”