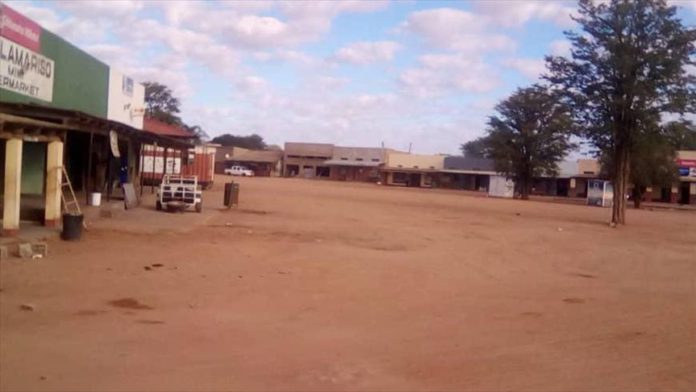 Mulibazisi Ngwenya, 79, sat on the verandah of his closed shop in Maranda, a small town in Zimbabwe, reminiscing about the days when he still had a thriving grocery store.

He is now frail in both health and finances, and is seeking tenants for his shop in Maranda, a small business center on the northern fringe of Mwenezi district in Masvingo province, which is surrounded by granite mountains.

Tenants have taken his shop but then vacated it over the last few years due to the fragile economy. Ngwenya is now losing hope of renting out his shop again, even though he needs money to supplement his income in his old age.

A former police officer before the southern African nation gained independence in 1980, Ngwenya said he quit his job and built a shop and opened a grocery store 40 years ago. Now he is finding it difficult to find a new tenant since his shop, like him, is also old. His shop appears unkempt, with damaged doors, fractured flooring, the ceiling falling off, and shelves infested with white termites.

He is not the only one in Maranda as a large number of people running rural enterprises are suffering difficult times, with their businesses collapsing over decades.

“It’s no longer easy doing business here. As you can see, my shop is not functional anymore, which means I am without income despite the fact that I have depended on it for many years,” Ngwenya told Anadolu Agency.

Even his consecutive renters have had to leave since challenges have taken a heavy toll on them as well.

“I had to close down the grocery store because I had no other option,” Ngwenya said, recalling the country’s hyperinflation, which has been roaring since 2002.

The town’s businesses have been dwindling since then, and several others, including his shop, have shuttered. These businesses’ owners can now be spotted playing cards and reminiscing about their “golden days.”

Now, poor people increasingly prefer to sell food items from a pushcart rather than renting a shop and raising their overhead expenses due to the growing deterioration of rural business infrastructure.

“The shops that you see here are crumbling apart, and as you can see, the roads that have been used to transport goods to these remote shops throughout the years are now badly broken, signaling that business interest here has shrunk,” Mangari told Anadolu Agency.

Another local Charwei Mupinga was selling used clothes outside the shuttered shops. She used to work as a salesgirl in one of these stores. But due to the country’s dire economic conditions, the owner closed it, leaving the 49-year-old jobless.

The same problem exists in the Gwamatenga area of the same district, prompting residents to relocate to larger cities in search of work.

In the 1980s, the Zimbabwean government suggested the concept of “growth points” as a way to decongest cities and towns. This was done primarily to decrease rural-to-urban migration by providing jobs and basic services to rural people. These, however, remain undeveloped after four decades.

Apart from businesses, other rural infrastructure, including education and health care, is facing severe problems. Most private clinics lack sufficient water connections and schools have broken windows and doors, with several classrooms blocks missing roofing sheets that were previously blown away by strong winds or stolen by impoverished locals.

Shadrack Chauke, a local town planner, believes that corruption is at the basis of the problem in rural areas.

“The funds meant for the development of rural infrastructure are obviously being stolen somewhere at the top in the government and surely you cannot expect townships, schools, roads, and clinics to then flourish from nowhere,” Chauke told Anadolu Agency.

Prosper Chitambara, an economist from the Labor and Economic Development Institute of Zimbabwe, believes that much can be done to revive the country’s dying remote townships, which he argues have been exacerbated by the coronavirus pandemic.

“Rural townships have been victims of general economic challenges in the past, as well as COVID-19-related difficulties, which have not spared remote entrepreneurs,” Chitambara told Anadolu Agency.

“There are so many entrepreneurial skills in rural areas that need to be supported, and for this to happen, there needs to be some broad micro-economic support in both rural and urban areas because they operate in the same environment,” he added.