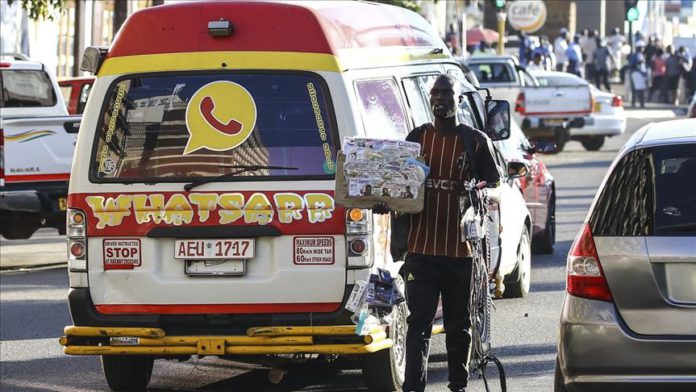 Known as kombis in Zimbabwe, commuter omnibuses are no more, but in residential areas they have resurfaced, with conductors this time not shouting out for passengers, but for customers to rush for buying wares strewn on vehicles’ rooftops and seats once occupied by passengers before the pandemic.

Since the genesis of the nationwide lockdown to surmount coronavirus, now, many kombi conductors like 26-year old Dan Mugari based in Harare, have switched to vending using the same kombis.

Kombis, amongst other forms of public transport, remain banned in Zimbabwe since lockdown started this year.

This means, many others like Mugari, who have solely depended on transporting people, can no longer venture into the business.

“If police would find us transporting people anywhere, they would impound our vehicles or arrest us because government ordered us off the road when lockdown was announced,” Mugari told Anadolu Agency.

Now, for Mugari and several other kombi crews, converting commuter omnibuses into mobile shops has become the way to go as they battle for survival during the lockdown to combat coronavirus in Zimbabwe.

Even for other Harare residents like 37-year old Mary Msindo, kombis, with their new roles, have made it easier for many like her “to easily access groceries that have been hard to find at the start of the lockdown.”

“It hasn’t been easy for me to leave home owing to the nationwide lockdown, but I have nothing to worry about now because commuter omnibuses which now function as mobile shops are delivering groceries at my door step,” Msindo told Anadolu Agency.

It remains illegal even for omnibuses to make any business trips during the lockdown, and so, Mugari said: “We sneak into residential areas where we have ready clients for our goods.”

As such, even as soldiers and police remain on patrol enforcing lockdown rules, with their survival instinct in the midst of the ravages of coronavirus, kombi crews like Mugari, commuter omnibus drivers and conductors, have endured against all odds.

So, for transport operators, as lockdown rules derail their means to earn a living, it has become survival of the fittest during the pandemic storm as many like Mugari evade the law to survive.

The Zimbabwean government replaced the omnibuses with its own buses from the Zimbabwe United Passengers Company (ZUPCO).

As such, any other form of transport which is not ZUPCO and wants to be on the road is required to do so under the franchise of the government’s bus company.

But, many omnibus crews like Mugari have resisted the move to join ZUPCO siting poor returns at the end of the day.

Now, owners of the omnibuses, like Chihombeko, have opted to use their passenger vehicles stocking and ferrying groceries and vegetables, operating instead as mobile shops in a bid to remain in business.

Zimbabwe has been in lockdown since March 30, and since then, for commuters, life has not been easy with limited transport.

The Passengers Association of Zimbabwe, a civil society organization fighting for the rights of commuters in the country, has been at odds with the Zimbabwean government since the outset of the lockdown.

“Kombi operators have been driven out of business following the government decision to give a monopoly to ZUPCO and force operators who want to remain afloat to operate under the ZUPCO flagship,” Tafadzwa Goliath, the president of the association, told Anadolu Agency.

Goliath said: “Those kombi operators who have converted their vehicles into mobile shops are seeing an option for their own survival.”

Passengers shortchanged by ban of kombis

But, still, to Goliath, “lamentably, we passengers remain short-changed as we continue to face transport challenges especially during this winter and we need the commuter omnibuses to come back into operation.”

Meanwhile, with commuter omnibuses now turned into mobile shops by kombi crews who have switched to vending in their battle for survival, Goliath added: “Commuters are being forced to board open trucks with no social distancing in practice at the cost of their own health.”

For Zimbabwe’s commuter omnibuses, it is also not easy for them to be placed under the franchise of the Zimbabwean government’s ZUPCO buses.

“Your fleet must pass the test for the expected fitness standards under ZUPCO requirements if you want to join the franchise and that is not easy and so the only alternative is to opt to use the kombis as mobile shops,” Derick Nhumwa, the owner of a fleet of 32 grounded kombis in Harare, told Anadolu Agency.

For Mugari, who now sees hope for the revival of his economic fortunes even amid the indefinite lockdown pronounced by Zimbabwean President Emmerson Mnangagwa, “moving with our mobile shops has become our way of life because we have to do anything to earn money.”

“This is all I know and personally I feel that we have to make use of the kombis for we cannot leave them parked, idle until they lose value,” said Mugari.

US Senators allege CIA collected backdoor data on US citizens