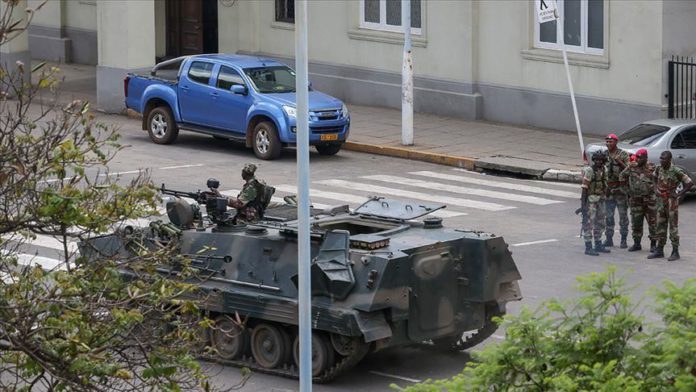 Armed soldiers on Thursday forcibly shut down the Zimbabwean capital Harare, ordering people to leave the Central Business District, and businesses to close ahead of anti-government protests scheduled for Friday.

The protests fall on the same day the contentious 2018 elections were held in the landlocked African country.

People are being barred from entering the capital, with their lockdown permits being torn by marauding soldiers, who also randomly chased and beat pedestrians.

“I had my permit allowing me to go to work in town torn up by soldiers,” 26-year-old Tanaka Mundonda, who said he repairs mobile phone handsets, told Anadolu Agency.

Zimbabwe’s opposition parties called for anti-government protests to register their dismay against the “rampant corruption” in President Emmerson Mnangagwa’s government.

Jacob Ngarivhume, the coordinator of the scheduled demonstrations, was arrested last week on accusations of inciting public violence through social media.

He is currently detained in prison awaiting bail, a hearing for which will be held on Monday.

Journalist Hopewell Chin‘ono has also been held on similar charges.

Addressing the media at his office, Minister of Home Affairs Kazembe Kazembe banned the protests, claiming they were likely to turn violent.