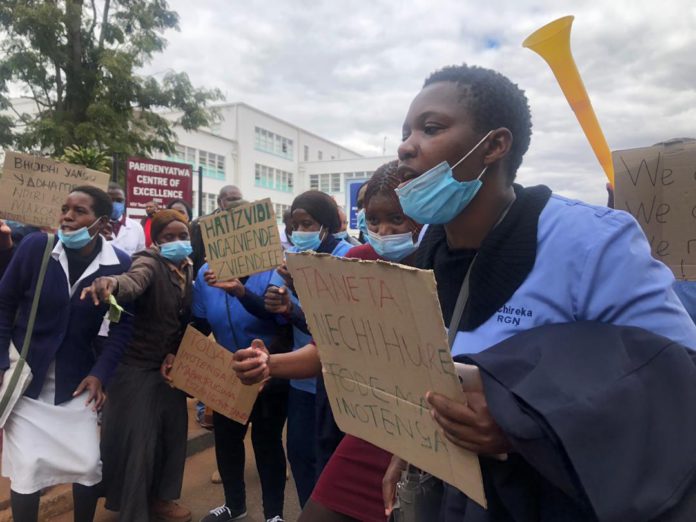 Hospital workers at Zimbabwe’s biggest hospital walked out on Wednesday, expressing anger over the government’s decision to abruptly cut their salaries by at least 50 percent.

“We were taken by surprise that at a time when we expected the government to increase salaries because of inflation, they decided to slash our meager earnings,” said Enock Dongo of the Zimbabwe Nurses Association (ZINA).

“We want money that can buy [protection] so that we can satisfactorily deal with COVID-19 coming from our homes.”

“We’re not so sure why they garnished our salaries, they still owe us an explanation, that’s why we’re protesting,” said Douglas Chikobvu, secretary general of the Zimbabwe Professional Nurses Union.

The protests took place in Harare, where nurses, doctors, radiographers, and other support staff demanded answers over the varying deductions including allowances for COVID-19 frontline workers.

The protestors were waving signs with messages such as “$40 can’t cover your daily expenses,” “we’re nurses and humans too,” “we need more money,” and “we’re hungry.”

Meanwhile, soldiers and police tightened a lockdown security in major cities and towns, turning people back home for unexplained reasons.

The hospital workers strike could hamper efforts to deal with COVID-19 in a country that has recorded 391 confirmed cases including four deaths to date.

In the meantime, the government has responded by raising civil service wages and allowances.

“With immediate effect all Civil Servants salaries will be adjusted upwards by 50%, in addition all civil servants will be paid a flat non-taxable COVID-19 allowance of $75 per month,” a Finance Ministry statement said.

“The interim arrangement is for three months starting from June 2020.”

But Dongo expressed concern that the government is avoiding negotiations and announcing salary adjustment through statements instead of dialogue.