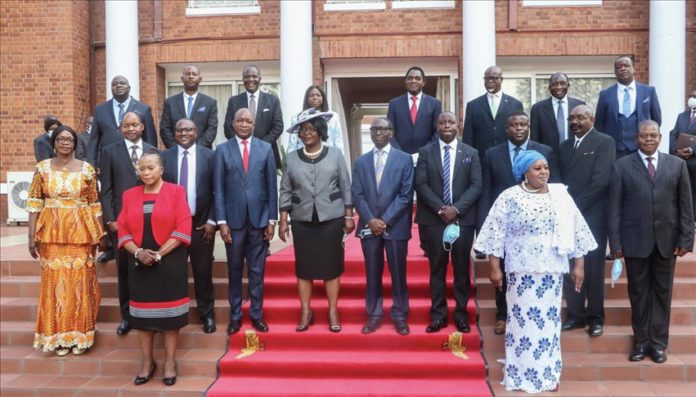 Zambian President Hakainde Hichilema broke nearly three weeks of public suspense on Tuesday by unveiling half of his Cabinet.

After being named the winner of the Aug. 12 general election, Hichilema was sworn into office Aug. 24 and appointed his first minister Aug. 27.

Situmbeko Musokotwane was tasked to head the Finance Ministry.

Hichilema, who defeated former President Edgar Lungu by more than 1 million votes, has since remained tight-lipped about his Cabinet composition only saying that he needed time to assemble a competent brass that would serve the nation with loyalty and humility.

At a ceremony at State House, Hichilema unveiled the new ministers including two who once served in the former Patriotic Front (PF) regime — Felix Mutati to head the Science and Technology Ministry and Sylvia Masebo as chief of the Health Ministry.

Mutati was an alliance partner to Hichilema in the elections after forming the Movement for Democratic Change when Lungu sacked him in 2018.

Maseko ditched the PF after Lungu replaced the late Michael Sata as republican president in 2015.

The president urged those appointed to be servants of the more than 18 million people by avoiding the temptation of looting public funds to sponsor luxurious lifestyles.

Hichilema said he expected to conclude other appointments today.

The ministers to be sworn-in would represent agriculture, tourism, commerce, mines, information, livestock, green economy, youth and sport, and small and medium enterprises.

There are also two slots to be filled at the provincial level.

There is racism in Denmark: lawmaker