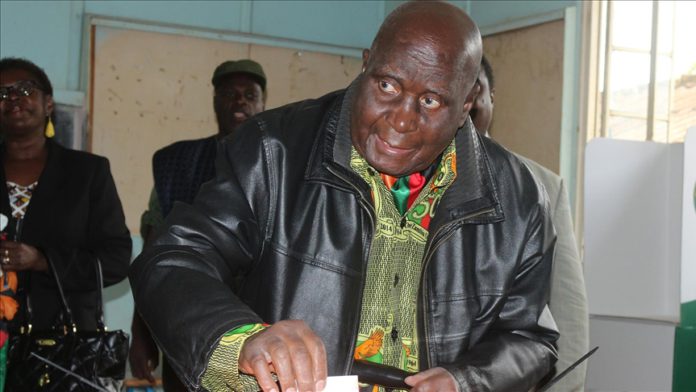 Zambia’s founding President Kenneth Kaunda, who died on June 17 at age 97 after a battle with pneumonia, was laid to rest in the capital Lusaka on Wednesday.

Speaking at a church service before the burial, President Edgar Lungu declared April 28 as an annual national holiday in Kaunda’s honor.

Panji Kaunda, 74, the founding president’s first son who is a retired army colonel and accompanied his father’s body throughout a two-week tour of the country, called for national unity ahead of general elections next month.

Besides Lungu, other candidates contesting for the presidency, including Hakainde Hichilema of the largest opposition United Party for National Development, were also present during the service.

Buried in his trademark Safari tailored suit with a white handkerchief in left hand, Kaunda was accorded a gun salute and military fly-past by the army.

Zambia and Africa will remember him as a liberation hero who looked beyond his country’s independence to liberate other frontline states in the emancipation struggle.

He was the last man standing among the founders of the Organization for African Unity in 1963, a forerunner to the present day African Union.

Kaunda became the president following independence in 1964. After losing multi-party elections in 1991, he stepped down from the office.

He strongly supported efforts to end apartheid in South Africa, and was a staunch backer of liberation movements in Mozambique and Zimbabwe.

He is survived by eight children, 30 grandchildren and 29 great grandchildren. Kaunda’s wife Betty died at age 84 in 2012.

Switzerland draw with Wales in EURO 2020 Group A match