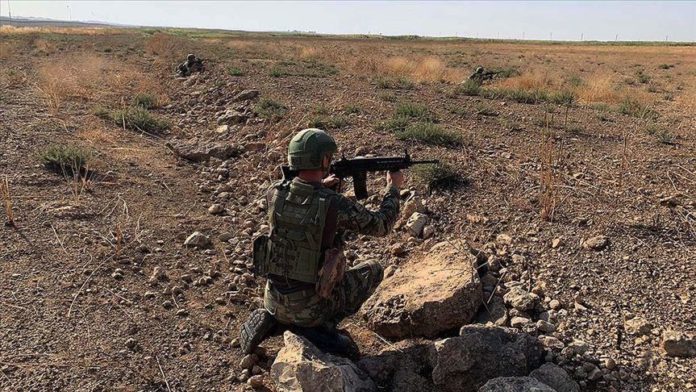 With successful security operations in April, Turkey inflicted heavy blows on the YPG/PKK, a terror group that has killed tens of thousands of people in its decades-long terror campaign.

Some 122 terrorists, including senior members of the group, were neutralized as part of the counter-terrorism efforts of the Turkish Armed Forces, police, gendarmerie, and the National Intelligence Organization (MIT) to thwart attacks on the country’s peace and harmony, according to an Anadolu Agency tally from news reports.

On April 10, Mahmut Oktay, codenamed Hayri Mava, was apprehended when a suspicious vehicle was stopped in the Mus province.

Similarly, PKK terrorist Abdurrahman Kayihan, alias Andok, on April 19 surrendered in Kiziltepe in the southeastern Mardin province after being persuaded by security forces.

On April 22, Resul Ozdemir, also known as Zibo, was brought to Turkey through the cooperation of MIT and Swedish authorities. He was a member of the PKK’s terrorist youth wing.

On April 29, Hafize Ozdemir, or Zin Avesta, a senior wanted terrorist, was found dead in a cave in the eastern Tunceli province. Her fellow terrorists left her to die by blocking her from receiving cancer treatment.

Meanwhile, the PKK’s so-called “Cemce group” was destroyed when seven terrorists, including four on Turkey’s wanted list, were neutralized during an operation in Kagizman in the eastern Kars province in the last two days of April.

On the other hand, a worker was martyred by terrorists in Mardin on April 3, five civilians in Diyarbakir on April 8, and another worker in Sirnak on April 14.

Two soldiers were martyred on April 15 and April 25 respectively in northern Iraq’s Hakurk and Haftanin regions.

In its more than 30-year-terror campaign against Turkey, the PKK – listed as a terrorist group by Turkey, the US and the European Union – has been responsible for the deaths of 40,000 people, including women, children, and infants. The YPG is the PKK’s Syrian offshoot.