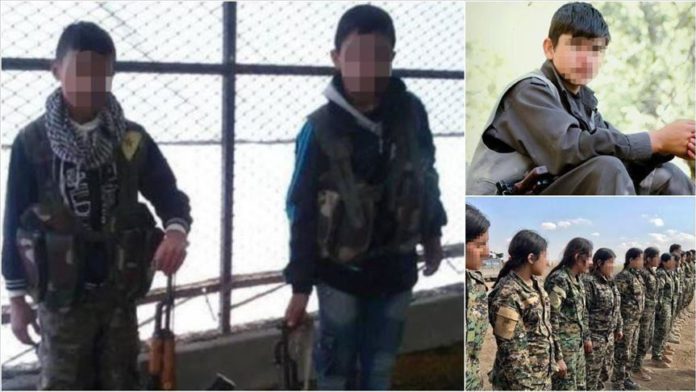 YPG/PKK terrorists kidnapped a 14-year-old boy in northeastern Syria to forcibly recruit him, according to local sources on Tuesday.

Terrorists continue to kidnap children by separating them from their families in areas under the terror group’s occupation.

The terrorist group, that disregards international law, kidnapped Salar el-Halife in Siha village in the city of Qamishli, the sources said.

According to the sources, terrorists took el-Halife to Qamishli’s Kahtaniyye village to forcibly recruit him.

YPG/PKK terrorists had kidnapped two girls in Qamishli in September and October.

“The Kurdish People’s Protection Units (YPG and YPJ) in northwest Syria continued to recruit, train, and use boys and girls as young as 12 years old,” the report said. “Since 2017, international observers reported that YPG and YPJ recruit — at times by force — children from displacement camps in northeast Syria.”

Also, the UN Human Rights Council published new findings in a report on Jan. 16 that YPG/PKK terrorists were using child soldiers in Syria.

Virginia Gamba, the UN secretary-general’s special representative on children in armed conflicts, met with a YPG/PKK terrorist in June 2019 in Geneva and signed a deal to end the recruitment of child soldiers, another proof of the terror group’s war crimes and crimes against humanity.

In its more than 30-year terror campaign against Turkey, the PKK — listed as a terrorist organization by Turkey, the US, and EU — has been responsible for the deaths of 40,000 people, including women, children, and infants. The YPG is PKK’s Syrian offshoot. YPJ is the women’s wing of YPG/PKK in northern Iraq and Syria.