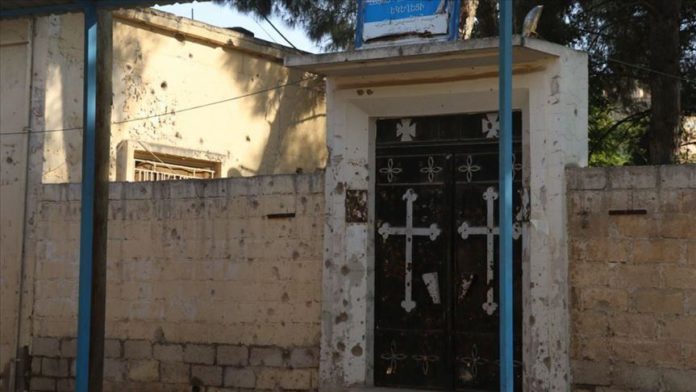 Aramean Christian students from northeast Syria were blocked from completing their final exams by the self-declared autonomous administration in northeast Syria led by the YPG/PKK terror group, the World Council of Arameans (Syriacs) (WCA) said.

The students complained that their future has been put at risk due to efforts by the YPG/PKK, which continues to carry out their long-known plan of transforming this fertile part of the country into an independent Kurdish region, the organization said in a press release.

The YPG/PKK published a decree forbidding many students from taking their final exams, which were scheduled to start on June 21.

Since they see themselves as the new rulers of this region, the Kurds do not acknowledge the textbooks or the schools, colleges and universities that belong to the state, according to a WCA student from Malikiyah.

Maryam, another WCA member from Malikiyah who fled to Qamishli to finish her exams, agreed.

“They just want to chase us away and take over our properties and land with the purpose of giving it a Kurdish makeover. Until we remain here, they will try to limit our freedoms and subject us to brainwashing programs with their own teaching materials and teachers,” she said, speaking to the WCA.

In August 2018, Arameans from Qamishli braved gunfire while protesting the YPG’s decision to close schools in the Hasakah governorate after the Kurdified curriculum was rejected and the Arameans had not applied for a license with the YPG.

On Sept. 22, 2018, a non-compliant teacher barely escaped death to testify how the YPG and its Aramean communist proxy failed to murder him with baseball bats in front of his home.

Since October 2015, when the Kurdish YPG ‘changed its brand’ to the “Syrian Democratic Forces” (SDF), the YPG has repeatedly attempted to shut down or seize countless public and private schools.

It is alarming that their textbooks include self-created maps of ‘Greater Kurdistan’ which defy internationally recognized borders, and expose the YPG as being inextricably intertwined with the Kurdistan Workers’ Party (PKK). The books also praise PKK’s jailed leader, whose images feature all over their occupied region, added the press release.

The WCA condemned the shameful crimes committed by the YPG/PKK Kurds against defenseless civilians.

The internationally recognized and fundamental human right of education was yet again violated, according to the WCA.

It invited the Western media, parliaments and governments to take action against the ongoing abuse of the YPG/PKK’s military, financial and political support coming from certain UN member states.