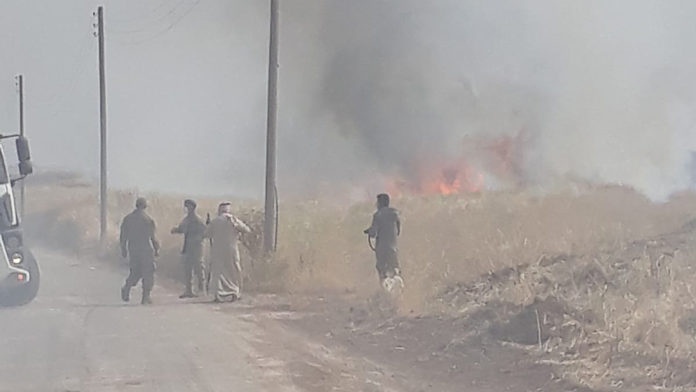 Terrorist organization YPG/PKK elements tried burning down farmlands near the Operation Peace Spring zone, then attacked security forces and the people who were en route putting out the fire.

Terror group YPG/PKK does everything to disturb peace in Operation Euphrates Shield (2016), Olive Branch (2018) and Peace Spring (2019) zones in northern Syria, according to Turkish security forces, who asked not to be named due to restrictions on speaking to the media.

Terrorists usually attack agricultural fields, and in the latest incident on May 26, they set fire in fields in the east of Operation Peace Spring zone.

The terror group also attacked those who were trying to put out the fires, wounding two from the Syrian National Army, and a civilian.

Explosives were found and destroyed after the search and sweep activities of the security forces in the area.

Terrorist elements also claimed that the Syrian National Army elements burned down some fields in the rural areas of the northeastern Tal Tamr town, making Syria Human Rights Watch prepare a false report based on these claims.

Villagers in the region confirmed fields were burned down by YPG/PKK terrorists, adding that the terror group intentionally started fires in areas under the protection of Turkish Armed Forces, to disturb peace and turn the local people against the Turkish forces and Syrian National Army.

An official from the provincial authority said terrorists’ provocations are expected to continue in the following days.