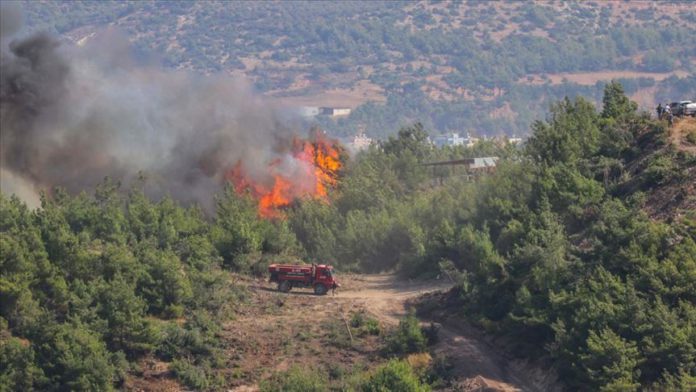 Some social media accounts handled by the supporters of the YPG/PKK terror group claimed that the forests fires in eastern Turkey had been set by a group close to the YPG/PKK.

The media branches of the terror group and some social media handles close to the YPG/PKK started to spread propaganda over the forest fires which started in the southern Hatay province on Friday and has spread to the districts of Belen, Iskenderun and Arsuz, but contained Saturday afternoon.

The posts sharing pictures of the region where 542 people were evacuated by the rescue teams and of burnt trees claimed that the fire was set by “the Children of Fire Initiative”, a group close to the YPG/PKK.

The people knocked the “mocking posts” about the fire, which inflicted damage on the wildlife and the forest area, and many teams worked to extinguish the blazes for two days.

Earlier, Agriculture and Forest Minister Bekir Pakdemirli told reporters following his inspections on the ground that it is suspected that the forest fire could be an arson attack.

The Hatay Governorship was conducting an investigation into the fires and four people were arrested, with two of them later released and two new suspects added, Pakdemirli said on Saturday.

Separately Mustafa Sentop, the parliament speaker, said on Twitter Sunday that the terrorist attack allegations about the fire in Hatay will be handled meticulously and those responsible will be found as soon as possible.

Cooling works continue in the forest fires that started two days ago and was taken under control on Saturday with a large number of water trucks and ground workers.

At least 10 people were slightly injured in the blaze while 20 houses and five vehicles were also damaged.

US reaffirms commitment in call with Afghan leader