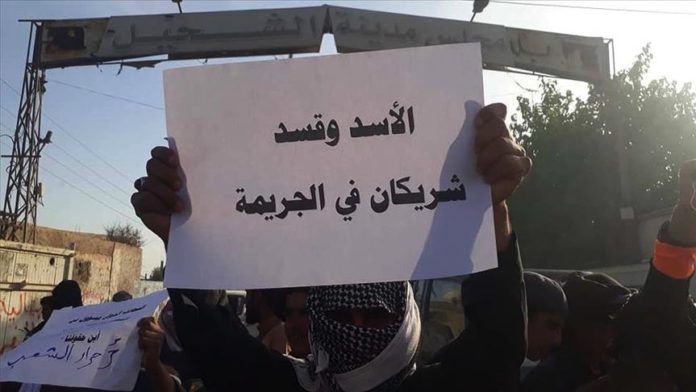 YPG/PKK terrorist organization on Monday raided villages in Deir ez-Zor province in eastern Syria to detain participants in demonstrations against the terror group, according to local sources.

The terrorist organization rounded up some 50 Syrian citizens in the last 40 days and placed them in a prison in the countryside of Deir ez-Zor, the sources said.

Since August, Arab residents of Deir ez-Zor province have staged demonstrations against the YPG/PKK terrorist group to protest discrimination against the local population, as well as poor living conditions and rampant corruption in the region.

Two civilians were killed from the YPG/PKK fire during the demonstrations so far.

Deir ez-Zor is a major link between Iran and Lebanon. Pipelines and trade routes from Iraq and Jordan also pass through the province.

Bordering the eastern bank of the Euphrates River, it is currently under the control of the YPG/PKK terrorist organization.

With the help of Russia and Iran-backed militias, the central and western parts of Deir ez-Zor fell to regime forces as Daesh/ISIS terrorists retreated in November 2017.