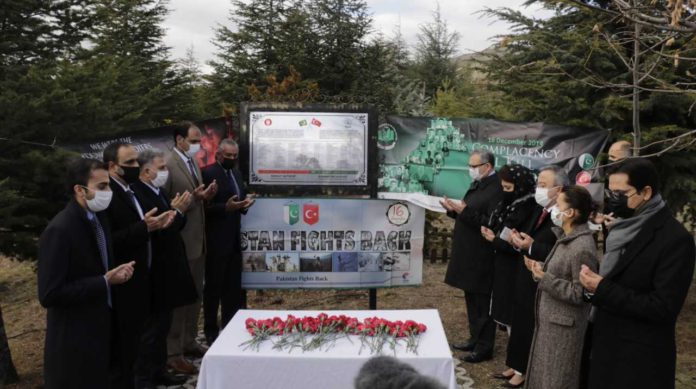 The Pakistani ambassador to Turkey on Wednesday led a prayer meeting for martyrs of a 2014 school attack in Pakistan.

“This carnage is one of the most tragic events in our history, which left every Pakistani in utter shock and grief,” Syrus Sajjad Qazi told the gathering in the Turkish capital of Ankara.

The commemoration event was jointly organized by the Pakistan Embassy, and Kecioren Municipality of the Turkish capital at the AK Party Memorial Forest, where a monument was built in 2015 in remembrance of the students and teachers who lost their lives in the attack.

To immortalize the memory of each “young soldier,” 150 trees were planted at the site inaugurated by Gen. Raheel Sharif, then chief of Pakistan’s army.

“May the sacrifices of these young people remind us of the preciousness of our independence and of our nation,” Qazi prayed at the site where the victims’ names are displayed along with banners reading “We were the youngest soldiers” and “I could barely carry the books but I faced the bullets with courage,” among others.

Expressing support to Pakistan, Metin Akdemir, the deputy mayor of Kecioren, said: “Nothing can justify such a brutal and inhuman act.”

Qazi said the planting of trees by the municipality is a source of strength for the grieving families, as well as the entire Pakistani nation. “This would keep their memory alive in Turkey forever,” he said.