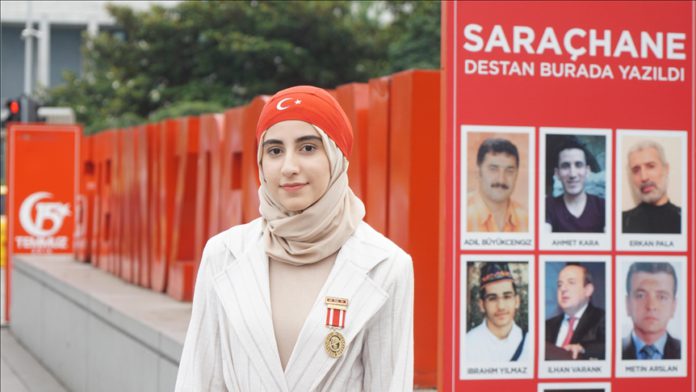 A young Turkish woman who bravely fought in the streets against the defeated coup in 2016 is proud of being injured and surviving that fateful night.

Adviyye Gul Ismailoglu is one of the millions of Turks who put the struggle to prevent the FETO terror group’s defeated coup attempt.

Ismailoglu, despite being just 14 years old, left her house in Istanbul’s Fatih district with her mother, father and older sister after Turkish President Recep Tayyip Erdogan encouraged the nation to take to the squares and resist the terror group.

Ismailoglu, who was walking to the Istanbul Metropolitan Municipality building in Sarachane, was seriously injured in her left arm as putschists opened fire on the crowd.

“A wounded fell next to me. I think she was shot in the knee. I heard her shout and stood up with an instinct to help. When I got up I felt pain in my back,” she said.

“I thought I had been shot in the back but the bullet went through my left arm, shattering the tip of my scapula, bruising both of my lungs at the tip. The bullet made a 15-inch diameter hole in my back as well.”

“Blood came out of my mouth and nose and I fell to the ground. I had no fear of death,” said Ismailoglu.

“As Yavuz Sultan Selim — one of the sultans of the Ottoman Empire – said, ‘if we die, heaven is ours, if we remain, the state is ours.’”