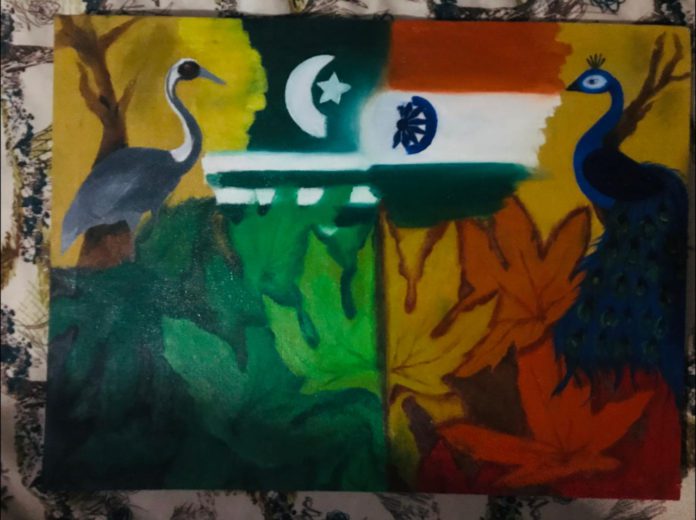 While Pakistanis and Kashmiris are set to observe the Kashmir Solidarity Day on Saturday in support of the pro-freedom movement in Indian-administered Kashmir, young artists pick color and brush to paint daily life in the picturesque valley.

Pakistan and its controlled part of the disputed valley officially observe the day on Feb. 5 every year since 1991 to express solidarity with people of Jammu and Kashmir.

Speaking to Anadolu Agency, Rabia Zainab, a fourth-year student at the Arts and Design Department of the University of Azad Jammu and Kashmir in Muzaffarabad, said she has tried to bring hope to the people, encouraging them to stay “steadfast” in their struggle against the suppression.

“Apart from purple, I have used yellow (water) color, which is a symbol of happiness and hope. I wish to intrigue the oppressed with the feeling of hope for a bright future and self-satisfaction through my piece,” she said.

Titled Light in the Darkness of Life, Zainab’s artwork is part of a painting contest organized by the university to highlight the different aspects of life in Kashmir, especially in the context of the solidarity day, through colors.

“Hope is like a trust that we can give to others. It is a remedy for despair and grief, in addition to courage and will to live,” she said, referring to the dominating purple color, which is a symbol of strength.

“Tomorrow awaits us because of hope. We all suffer calamities in common and if there is no hope (for a better tomorrow) we might have given up earlier,” she maintained, citing the psychological impact on a common Kashmiri caused by casualties, sieges, and economic destruction for decades. Echoing Zainab’s views, Hafiz Usman Naeem said in his piece of artwork, predominantly a pencil drawing showing a child in a cage, he has attempted to paint the essence of peace and hope for the “oppressed” Kashmiris.

“A good piece of art can either soothe the pain or make it more intense. It (drawing) also shows the silence of the UN and the international community over a continuing streak of human rights violations in the valley,” the young artist told Anadolu Agency.

“The child is caged but only temporarily because one day the valley will lighten up with the fire of freedom,” he maintained.

“Let’s be hopeful of a great outcome.”

Syed Bilal Kazmi, another university student taking part in the contest, used watercolors to paint a Kashmiri mother holding her child in her arms.

With an eye-soothing green background, the highlight of Kazmi’s artwork is the “supreme smile” of the woman attired in a blue Kashmiri gown, and sporting a traditional cap.

“Even though she has long been facing a myriad of hardships, her happiness tells the world how courageous a Kashmiri woman and mother can be,” Kazmi said while speaking to Anadolu Agency.

While holding her child, the woman makes a victory sign, vowing to remain steadfast in the face of multiple challenges she has been facing for decades. Rukhsana Khan, the head of the Arts and Design Department, said that dozens of young artists took part in the contest, painting various themes in regard to “circumstances on the other side of the divide,” including “half widows,” and destruction of Kashmir’s cultural identity and violation of human rights etcetera.

Half-widow is a term given to Kashmiri women whose husbands have been missing. Several human rights groups accuse the Indian forces of being involved in the forced disappearances during the ongoing conflict in Kashmir.

Moreover, she said the young artists have also painted the agony of Kashmiri youths and their struggle for their homeland, in addition to the traditional architecture of Kashmir Valley, which is also the identity of people across the divide in Kashmir.

The valley comprises Muzaffarabad, the capital of Pakistani-administered Kashmir, also known as Azad Kashmir, and the scenic Neelum Valley. Whereas, the rest of the districts of the Pakistani part of Kashmir belong to the Jammu region.

The artworks will be put on display on Feb. 5 at the university campus.