TurkishPress
Home News 'Yoga brings not only peace to people but unity to countries as... 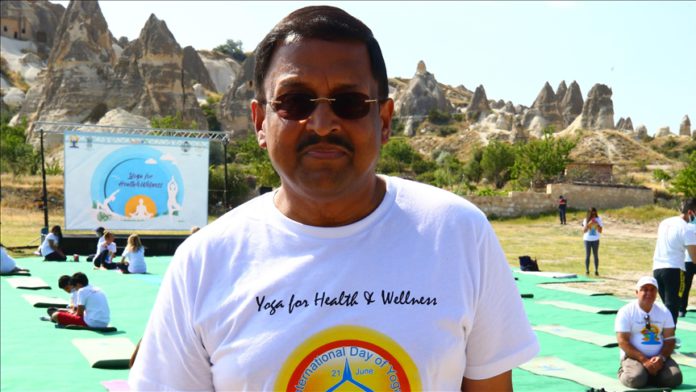 After the idea of an international yoga day was proposed to the UN General Assembly in 2014, 177 countries co-sponsored the resolution as the ancient practice brings not only peace and harmony to people but also unity to countries, according to Sanjay Panda, India’s ambassador to Turkey.

Referring to the June 21 International Yoga Day celebrations, the ambassador said India’s contribution to yoga gatherings was that the embassies all over the world took the lead so yoga experts were sent to all countries.

In 2014, when Indian Prime Minister Narendra Modi introduced the value of yoga at the UN General Assembly meeting, he said yoga comprises universal values and a universal appeal, and his proposal was to popularize yoga all over the world because it has a lot of health benefits, Panda told Anadolu Agency.

“So, unprecedentedly, 177 countries co-sponsored the resolution, including Turkey. Never before had so many countries supported a resolution in the UN,” he said.

Panda said that in the first few years, the Indian Council for Culture and Relations selected yoga experts and sent them to conduct yoga classes and also train more yoga trainers all over the world.

“Here in Turkey, we never needed a yoga teacher to come, although they came to the yoga center in the embassy, but already a lot of experts are available in Turkey, especially in Istanbul, the number of yoga studios are phenomenal,” he noted.

“Why do you think the UN accepted it (the yoga day proposal)? It has got pure health benefits and it brings peace and harmony. When there are so many conflicts and problems, like terrorism, when there are so many global issues, yoga gives you a sense of balance, it even gives countries a peace of mind and unity,” Panda said.

The ambassador noted that the council also provides facilities and scholarships for yoga experts, but to those who have got some basic yoga background.

“You do not necessarily have to go to India for it, many assessments after COVID-19 are taking place online,” he said.

“If we have an emotional problem, it shows itself on our bodies as well. Yoga isn’t like a painkiller, it doesn’t promise to cure or numb any disease but it’s preventive and it teaches us how to handle our problems,” she said.

Bican also said that in India, more and more people are learning yoga every day as part of basic physical education.

“People used to think that yoga was more of a secluded practice that was taken by hermits but now that it’s more modernized and simplified, so it’s practiced by all people of different religions and identities,” she added.

Bican said she strongly recommends learning yoga from the sources, reading, and researching about the Vedas (religious texts originating in ancient India).

“Please be careful when choosing an instructor. A teacher can make this magical experience a living hell for you. You may get injured not only physically, but also emotionally or mentally. Yoga has nothing to do with fake gurus, fancy Instagram photos, or charlatans, its benefits are in its simple techniques that are taught by humble teachers. So, it’s your own journey after all,” Bican said.