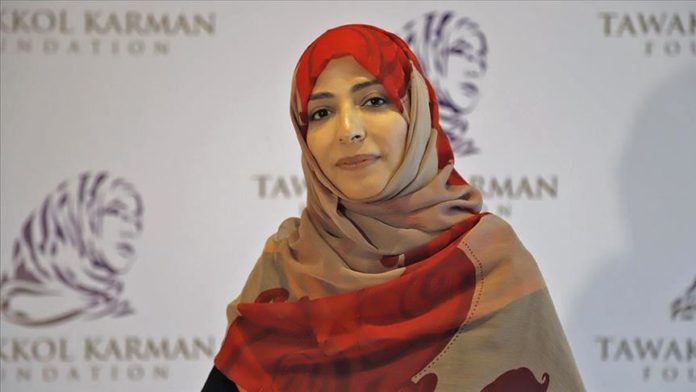 Yemeni Nobel Peace Prize winner Tawakkol Karman accused Saudi Arabia of supporting the UAE-backed Southern Transitional Council (STC) in Yemen amid a recent agreement between the Yemeni government and STC to accelerate the implementation of the Riyadh agreement.

“Everything was expected. The Secretary of the Saudi Ambassador, [Yemeni Prime Minister] Maeen Abdulmalik was assigned to form the government of [President] Abdrabbuh Mansur Hadi and his advisers, against his will,” Karman said Wednesday on Twitter.

On Wednesday, Hadi ordered the country’s premier, Maeen Abdulmalik, to form a new cabinet in accordance with the Riyadh agreement signed with the UAE-backed Southern Transition Council (STC), acceding to a Saudi proposal to its expedite.

Warning that if the military and security terms of the Riyadh agreement remained unimplemented, this would lead to more violence, Karman said: “We have always said that Riyadh [Saudi Arabia] is the problem, not the solution.”

She accused Saudi Arabia of being the “maker and engineer of all this great ruin in Yemen,”

Saudi Arabia on Wednesday presented a resolution to implement the stalled Riyadh Agreement, according to the Saudi state news agency.

In response, Yemen’s separatist STC announced that it gave up its three-month self-rule in the southern provinces, with STC spokesman Nizar Haitham later said on Twitter that it accepted Saudi Arabia’s proposal.

Later on Wednesday, Yemeni President Abdrabbuh Mansour Hadi, who currently resides in Saudi Arabia, appointed a governor and chief of police in Aden, the temporary capital.

Violence had previously flared between STC and government forces since the group declared self-rule in Aden and other southern provinces in April.