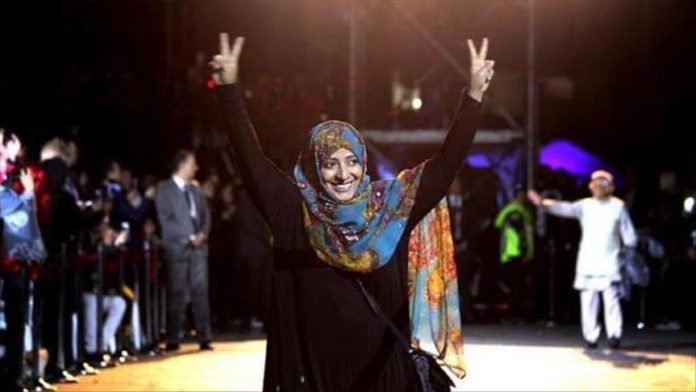 A Nobel Peace Prize laureate claims she has been subjected to a sweeping online campaign in Saudi Arabia and allied media because of her nomination to Facebook’s independent oversight board.

Tawakkol Karman made the claim on Twitter, insisting she has been the target of “widespread bullying&a smear campaign by #Saudi’s media&its allies” after she was appointed to the board last week.

“What is more important now is to be safe from the saw used to cut #jamalkhashoggi’s body into pieces,” she said Sunday, noting she was traveling to Turkey.

I am subjected to widespread bullying&a smear campaign by #Saudi’s media&its allies.What is more important now is to be safe from the saw used to cut #jamalkhashoggi’s body into pieces.I am in my way to #Turkey&I consider this as a report to the international public opinion.

She was referring to Jamal Khashoggi, a Washington Post columnist who was brutally murdered inside the Saudi Consulate in Istanbul in October 2018.

After initially saying he had left the consulate alive, weeks later, the Saudi government admitted he was killed there, putting the blame on a rogue group of Saudi operatives.

The CIA reportedly determined with confidence that the Kingdom’s Crown Prince Mohammed bin Salman directed Khashoggi’s murder, a charge he denies, but one that was given weight by a UN investigation’s recommendation that he be formally investigated.

Karman was the co-recipient of the peace prize in 2011 for her “non-violent struggle for the safety of women and for women’s rights to full participation in peace-building work,” and is the first Arab woman to be honored with the award.

She was one of 20 people Facebook selected to be part of its new oversight board alongside legal experts, free speech advocates and a former editor-in-chief at the UK’s Guardian newspaper. Among other things, the board will decide how hate speech will be handled on the social media platform

Several prominent voices have come out in support of the laureate after she said she is being targeted following her nomination, including UN Special Rapporteur on Extrajudicial Executions Agnes Callamard, who authored the international body’s investigation on Khashoggi’s killing, and the Nobel Women’s Initiative.

“I am sorry to hear dear @TawakkolKarman We stand in solidarity with you,” Callamard said on Twitter.

US solar industry workforce could be halved by COVID-19