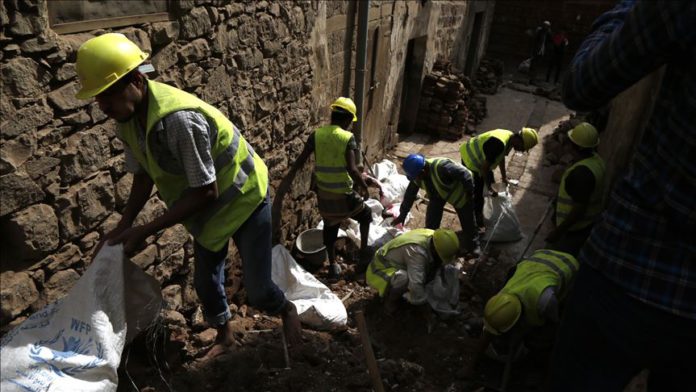 At least 14 deaths were recorded Friday in floods that hit Raymah and Sanaa provinces in northern Yemen.

A house collapsed in the Al-Jabin district and killed five.
Sources said agricultural land was damaged by the floods.
Heavy rains killed three people in the Al-Sad neighborhood in Sanaa.
Houthis-appointed Governor of Sanaa Homod Abad said told the Al-Masira channel the governorate is working within an urgent plan to decrease the effects of the rains in certain neighborhoods.
He said telecommunication and internet services were damaged because of the floods.
Dozens of Yemenis have died in the past two weeks because of floods that hit several provinces.
Yemen has been devastated by a conflict that escalated in March 2015 after Iran-backed Houthi rebels seized the capital of Sanaa and forced President Abdrabbuh Mansour Hadi to flee the country.
The conflict has left thousands of civilians dead and 3.65 million internally displaced, according to the UN.

Nearly half of Yemen’s more than 30 million people need immediate assistance to sustain or save their lives.