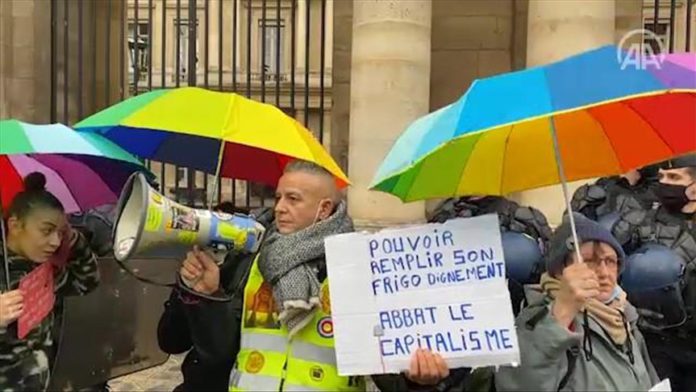 The Yellow Vests protestors took to the streets again on Saturday to demur French President Emmanuel Macron’s policies amid the COVID-19 pandemic.

Gathering outside the Council of the State in the capital Paris, hundreds of protesters marched towards the Chatelet Square.

Holding anti-Macron administration banners, protesters shouted: “We are here even if Macron doesn’t want” and “Macron, get ready, we’ll take you home,” as the French president is in self-quarantine due to coronavirus.

During the demonstration, they opened umbrellas to support those who were arrested last week in an anti-Islamophobia protest in the country.

Speaking to Anadolu Agency, a protester preferring to be referred only by first name Daddi, said that they are back in the streets to defend fundamental freedoms. “Police and judiciary work for the government. This is called dictatorship, nothing else.”

The protester decried the security bill and said that people are blacklisted because of their religion and they are monitored and followed.

Meanwhile, the Paris Police Department did not allow demonstrations around the National Assembly and in Champs-Elysees.

Since the start the Yellow Vests have been relentless, taking to the streets every Saturday since November 2018.

In September, they poured into the streets again for the first time since the coronavirus lockdown with demands for a more equitable way of life in France.

The demonstrations reached an early apex on Dec. 1, 2018 when thousands gathered to protest around the Arc de Triomphe, often their locale of choice.