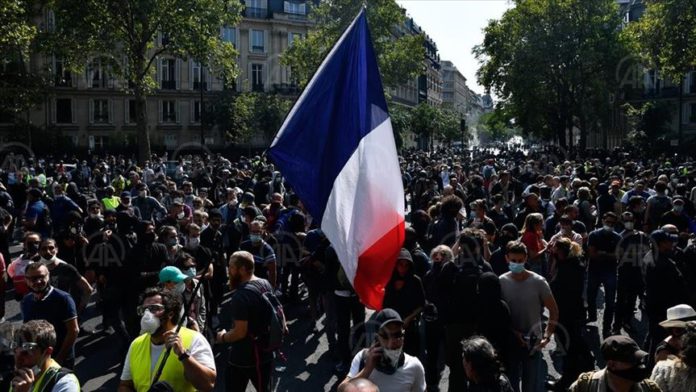 The Yellow Vests were out in force again Saturday with demands for a more equitable way of life in the Republic far from over, after being shelved for most of the coronavirus pandemic.

Approximately 1,000 protesters participated in demonstrations in Paris as well as Marseille, Toulouse, Lyon and Lille.

Jerome Rodrigues, famously known as the unofficial head of the movement, lead the much smaller thab expected crowd in the capital on the Place Wagram and Boulevard Pereire in the north of the city.

Rodrigues spoke out on behalf of those assembled — nightclub owners still unable to open businesses and citizens not part of the ruling class.

“We’ve been shelved, smashed, but the anger is there,” he said in a statement to Radio France International. “The people who held France together during the two-month lockdown — the health workers, cashiers, rubbish collectors — those are the Yellow Vests.”

The Gilets Jaunes, or Yellow Vests, is a two-year-old grassroots protest movement that was launched in response to France’s soaring fuel taxes and prices and a very apparent deepening divide between the classes.

Despite France’s cosmopolitan aura, many towns and villages remain provincial, even rural, with transportation systems hard to reach, forcing citizens into long and costly commutes.

The name of the movement was adopted for the yellow vests drivers are required to keep in their vehicles in case of an accident. Protesters are easily recognizable for wearing the vests during demonstrations.

By 2.15 p.m. (0015GMT) police had arrested 193 demonstrators, some carrying lethal weapons, like axes and knives. Tear gas was used to break up crowds on Place Wagram and Boulevard Pereire, as some protesters threw projectiles at police and set fire to trash cans and one vehicle.

Protesters carried signs that read, “Macron resign!” and “Macron the dictator, off to prison!”

Paris Chief of Police Didier Lallement had forbidden protests from taking place on the Champs Elysees, Paris’s prized thoroughfare and one that has already suffered from a lack of tourism in recent months. Merchants boarded up storefronts in anticipation.

“There’s a need for calm on this avenue which is a showcase for our country. So I banned the demonstrations,” said Lallement.

Since the start, the Yellow Vests have been relentless, taking to the street every Saturday since November 2018.

The demonstrations reached an early apex Dec. 1, 2018 when thousands gathered to protest around the Arc de Triomphe, often their locale of choice.

Three protesters broke into the monument and scaled to the top to wave the tricolor to the cheers of fellow demonstrators.