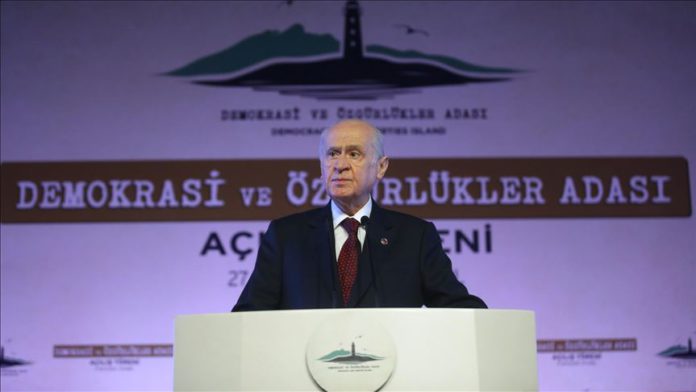 Trial by a military court in Yassiada, an island in the Sea of Marmara southeast of Istanbul, was not just political as it also questioned the appreciation and preferences of the Turkish nation, the Turkish opposition leader said on Wednesday.

“Not only the 1950-60 period was tried here [in Yassiada], but also the appreciation and preferences of our nation that is the only owner of will and sovereignty were also distressfully questioned,” Nationalist Movement Party (MHP) leader Devlet

He added that the founders of Yassiada courts “made democracy and freedoms sit in the dock.”

On his part, Turkey’s Parliament Speaker Mustafa Sentop said the new face of Yassiada is not an ordinary reconstruction or landscape work, but it is a “historical confrontation and a new beginning.”

“On the basis of every building that we see on this island, there are our nation’s will for freedom, resistance to coups and the determination to defend the constitutional order,” Sentop added.

The main cause of every military coup in our country is to prevent Turkey from accessing the power to develop independent policies, he said.

“This island where we come together today and visit in its new form is the scene of the political and judicial murder committed 60 years ago,” he stressed.

The island is where Turkey’s first democratically elected Prime Minister Adnan Menderes, along with leading Democratic Party (DP) members, were arrested after the May 27, 1960 coup and later jailed and tried.