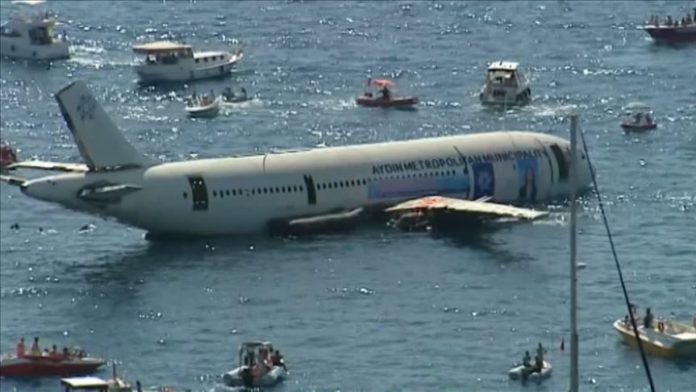 After flying the skies for 36 years, a cargo plane in western Turkey now awaits scuba-diving lovers from around the world.

With 54 meters from nose to tail and a 44-meter wingspan, the Airbus A300 cargo plane became the world’s largest sunken plane wreck in 2016 off the Aegean coast of the Kusadasi District of Turkey’s Aegean province of Aydin.

Though all parts of the aircraft, including the fuselage, are still in their original condition, fish of many species now dart about its interior.

He highlighted that professional divers from different countries would come to see the wreck in the past, but now only local tourists were present due to novel coronavirus.

“It’s possible to see many species here. You can see schools of Diplodus Vulgaris and Sargus,” he said, adding that he had also encountered conger eels and a crab in a dive nearby.

Saracoglu stressed that people did not dive in the area before the plane was submerged in the sea.

As many marine species nest around the plane, the site has become an indispensable destination for divers, as well as underwater photographers.

One seasoned diver, Ezgi Vatansever, said swimming through a submerged plane was an entirely different feeling from her previous underwater adventures.

“It was very enjoyable to observe a reef wreck there. I want everyone to see it, too,” she said.

After 1 month Palestinians flock to pray at Al-Aqsa