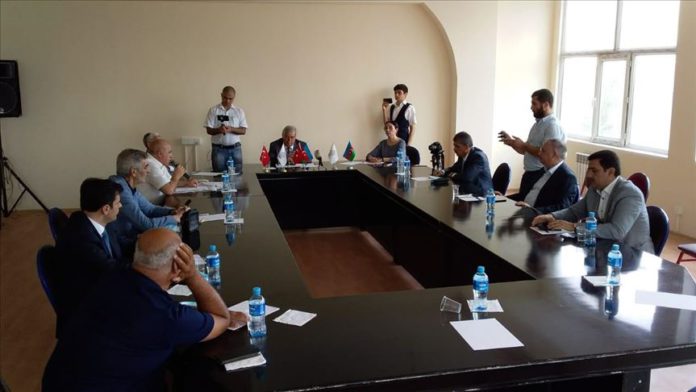 A union similar to the EU should be formed for Turkic countries, an Azerbaijani political party argued on Tuesday.

In a meeting in the capital Baku, Sabir Rustamkhanli, a lawmaker and head of the Civic Solidarity Party (VHP), along with the leaders of other political parties, discussed the political situation in the region and the future of relations with Turkey.

In a meeting marking the 102nd anniversary of the liberation of Baku from Armenian and Bolshevik occupation, the party leaders hailed the role of the Caucasian Islamic Army under the leadership of Nuri Pasha (Killigil), who, along with the Azerbaijani National Army and volunteer forces, liberated the city.

Following a minute of silence to commemorate the martyrs on the path of independence of Turkey and Azerbaijan, Rustamkhanli discussed the current global political situation and the goals of the Turkic world.

Rustamkhanli said that a century ago, on the eve of the foundation of the Azerbaijani and Turkish republics, political realities did not allow the states to realize the “dream of ideological salvation,” adding that today the opportunities are wider despite tougher global geopolitical conditions.

“Now it is necessary to learn from the past, to choose the right way of development to avoid new mistakes,” he said.

He also stressed that a motto of “Turkic unity” should be implemented alongside Turkey and Azerbaijan’s longstanding “one nation, two states” maxim.

Among other officials who joined the meeting over the phone from Turkey, Meral Aksener, the leader of Turkey’s opposition Good Party (IP), said both states and nations have always supported each other, adding that she believes this unity will grow stronger, said a VHP statement.

Also speaking at the event, the leaders of numerous political parties in Azerbaijan stressed the importance of raising Azerbaijani-Turkish relations to a military union and achieving economic, political, and military unity among Turkic states.