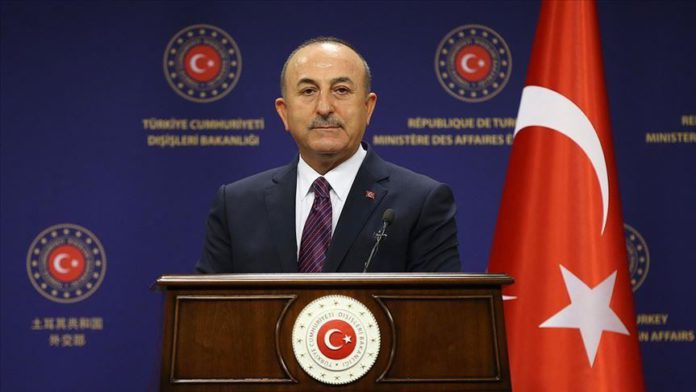 Stressing Turkey’s condemnation of Monday’s terror attack in the Austrian capital, the Turkish foreign minister has underlined the need to keep fighting ideologies which abuse Islam.

“Especially we need to continue our fight to destroy the ideologies of those who abuse Islam, our religion of peace,” Mevlut Cavusoglu told a joint news conference with his Sierra Leonean counterpart in the Turkish capital Ankara on Tuesday.

Cavusoglu also hailed Recep Tayyip Gultekin and Mikail Ozer, two ethnic Turks in Vienna who risked their own lives, facing a hail of bullets to help injured civilians and a police officer: “Our two brothers did what a human, a Muslim, and a Turk should do.”

He went on to say that no terrorist attack can be justified, and that Turkey stands ready for close and sincere cooperation against all approaches that cause terrorism.

At least three people died and 15 more were wounded in the terror attack in Austria’s capital on Monday evening, authorities have confirmed.

Top Turkish officials have expressed solidarity with Austria in the aftermath of the deadly attack.

In a phone call, Cavusoglu also spoke with his Austrian counterpart Alexander Schallenberg and conveyed condolences, saying Turkey stands in solidarity with Austria.

Touching on ties with Sierra Leone, Cavusoglu said Sierra Leone is one of the countries Turkey enjoys the best relations with not only in West Africa but also all of Africa.

The two countries cooperate closely to enhance their ties in many fields, including education, culture, and sports, he said.

“As Turkey, our wish is to enhance Africa’s stability, security, and economic development,” he added.

Saying that Turkey opens new embassies in Africa year after year, he stressed that Turkey aims to boast 50 on the continent.

Africa is made up of 54 countries.

Sierra Leone’s Embassy in Ankara is set to open today, the 36th African embassy in the Turkish capital, Cavusoglu said.

For her part, Sierra Leone’s top diplomat said that new embassy in Ankara shows the importance of ties between the two countries.

“We have an extremely long-term relationship with Turkey in the field of trade, agriculture, and culture, and all of them always afford opportunities for us to further strengthen our relationship,” Nabeela Tunis told reporters.

Saying that the countries continue to negotiate in several areas to enhance the mutual interests of both countries, she stressed that her country sees Turkey as “a reliable partner” in the international system.

“Today we signed an extremely important deal on preventing double taxation that will allow many companies to invest in Sierra Leone,” she said.

Saying investment and trade form the most important bridge between Turkey and Sierra Leone, she added that the two countries can make huge joint efforts in the fields of agriculture, mining, fishing, and infrastructure

“Assistance we received from Turkey at this difficult time actually strengthened our response mechanisms, and made we better able to combat the disease,” Tunis said, referring to Turkey’s medical supplies to her country in the face of the COVID-19 pandemic.

“We appreciate your help in this matter and would like to thank you once again,” she added.

China to restrict visas of US officials over Hong Kong