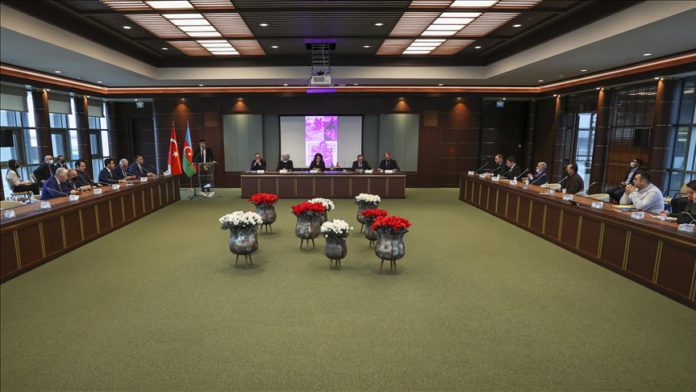 Undeniable proof of the Khojaly massacre, in which hundreds of Azerbaijanis were killed by Armenian forces 30 years ago, has been demonstrated to the world and must continue to be shown, Azerbaijan’s ambassador to Turkiye said on Thursday.

In an opening speech at a workshop in Ankara on the legal aspect of the “war crimes” committed by Armenian forces in the Karabakh region of Azerbaijan, Resad Mammadov said, “Armenia is guilty of war crimes” in the town of Khojaly on Feb. 26, 1992.

“Today’s ceremony is not a memorial service. Today’s ceremony is a meeting where academics, teachers, experts, and politicians gather and evaluate the war crimes that have been committed by Armenia against Azerbaijani people in Khojaly,” said Mammadov.

Describing the events in Khojaly as a “massacre,” he stressed that the entire world remained silent on the issue despite all the facts that have since come to light.

“Armenia and its politicians occupied Azerbaijani lands for 30 years, caused 1 million people to live away from their homeland for 30 years, and carried out the Khojaly massacre with a fascist ideology,” said Mammadov.

Underlining that Turkiye had always “stood by Azerbaijan, giving its full support and sharing our grief,” the ambassador said Yerevan was today “slandering our beloved Turkiye and making the events of 1915 a priority of the domestic and foreign politics of their own state, claiming that it is a ‘genocide.'”

Turkiye’s position on the events of 1915 is that the deaths of Armenians in eastern Anatolia took place when some sided with invading Russians and revolted against Ottoman forces.

A subsequent relocation of Armenians resulted in numerous casualties.

Turkiye objects to the presentation of these incidents as “genocide,” describing them as a tragedy in which both sides suffered casualties.

“Every year, before the anniversary of the so-called ‘genocide’, this issue is raised on all social media channels, world media, world parliaments and is used as a means of pressuring both Turkiye and Azerbaijan,” asserted Ambassador Mammadov.

Ankara has repeatedly proposed the creation of a joint commission of historians from Turkiye and Armenia as well as international experts to tackle the issue.

In 2014, President Recep Tayyip Erdogan, who was Turkiye’s prime minister at the time, expressed condolences to the descendants of Armenians who lost their lives in the events of 1915.

Mammadov also underlined the need to show the world the “undeniable and solid proof” of the Khojaly massacre.

“We have to tell it to the politicians, young population, and all other countries that this murder was a genocide.”

Despite the time that has passed since the Khojaly massacre, it has yet to be “legally evaluated worldwide,” said Aygun Attar, the chairwoman of the Turkish-Azerbaijani Friendship Cooperation and Solidarity Foundation (TADIV).

Also, delivering an opening speech at the workshop, which TADIV helped organize along with the Azerbaijani Embassy in Ankara, Attar emphasized that such an evaluation must be conducted and urged people to raise awareness of the mass killing.

“I express my gratitude to everyone who has accepted and shared our pain as their own,” she said.

The massacre is seen as one of the bloodiest atrocities by Armenian forces against Azerbaijani civilians in the Upper Karabakh region, which was liberated by Azerbaijan forces in fall 2020 after decades of occupation.

The two-hour Armenian offensive on Khojaly killed 613 Azerbaijani citizens — including 106 women, 63 children, and 70 elderly people — and seriously injured 487 others, according to Azerbaijani figures.