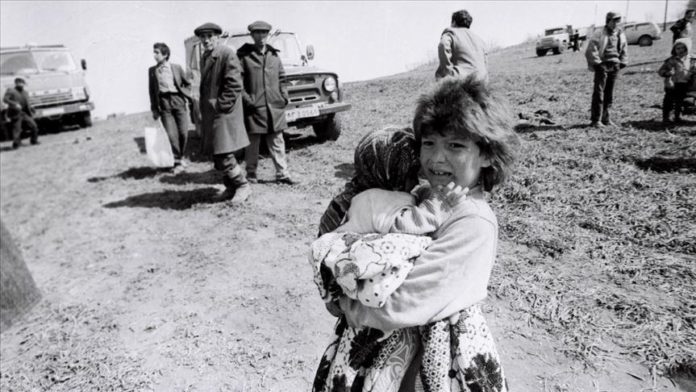 Pakistani officials, academics, and defense analysts have urged the international community to take action against the perpetrators of a 1992 massacre by Armenian forces in Khojaly, Nagorno-Karabakh which left over 600 people dead.

Speaking at a seminar on Monday co-organized by Azerbaijan’s Embassy in Islamabad and the Islamabad Institute of Conflict Resolution, parliamentarian Shehryar Khan Afridi said that repeated massacres and genocides show how the world has failed to protect oppressed people living in conflict zones, as the brutal principle of “might makes right” prevails.

“Mass rapes of women in Indian-occupied Jammu and Kashmir and Khojaly, Nagorno-Karabakh have been used by occupation forces as tools of genocide,” said Afridi, who also heads the Pakistani parliament’s Committee on Kashmir, a region disputed between Pakistan and India.

He added that Indian forces are also waging a “rape war” to advance their “genocide” of freedom-loving Kashmiris.

On Feb. 26, 1992, with the Soviet Union just dissolved, Armenian forces took over the town of Khojaly in occupied Karabakh after battering it with heavy artillery and tanks, assisted by infantry.

The two-hour Armenian offensive on Khojaly killed 613 Azerbaijani citizens – including 106 women, 63 children, and 70 elderly people – and seriously injured 487 others, according to Azerbaijani figures.

Some 150 of the 1,275 Azerbaijanis that the Armenians captured during the massacre remain missing. In the massacre, eight families were completely wiped out, while 130 children lost one parent, and 25 children lost both parents.

“What has the international community, including the UN Security Council, done against the culprits who killed hundreds of innocents in Khojaly?” asked Salma Malik, a political scientist at Quaid-e-Azam University in Islamabad.

Azerbaijan Ambassador Ali Alizada said that Armenia bears full responsibility for the Khojaly massacre, whose perpetrators must brought to justice.

He said that even though there were four UN Security Council resolutions and similar statements by other groups, there has been no action or pressure against Armenia during the 30 years of occupation and no legal acts against the perpetrators of the genocide.

He stressed that that Kashmir dispute also led to several UN Security Council resolutions but similarly no implementation of these resolutions for seven decades. He said he hopes the Kashmir issue will soon be solved by amicable and peaceful means in line with relevant UN resolutions.

On the situation in Kashmir, Afridi criticized the international community’s double standard over mass killings and human rights violations.

“The expansionist designs of India are a threat to world peace, and if the world fails to bring resolution to conflict zones like Jammu and Kashmir, no one can rule out the possibility of a new war erupting between Pakistan and India,” he said, warning that such a war could draw in other powers or even go nuclear.

“Only few countries among Pakistan condemned and raised their voices against the killing of innocents in Karabakh while world powers remained silent,” he said

Shoaib urged the UN and other world organizations to act against “India’s occupation of Kashmir.”

Sabah Aslam, founder and head of the Islamabad Institute Of Conflict Resolution, also spoke at the occasion.