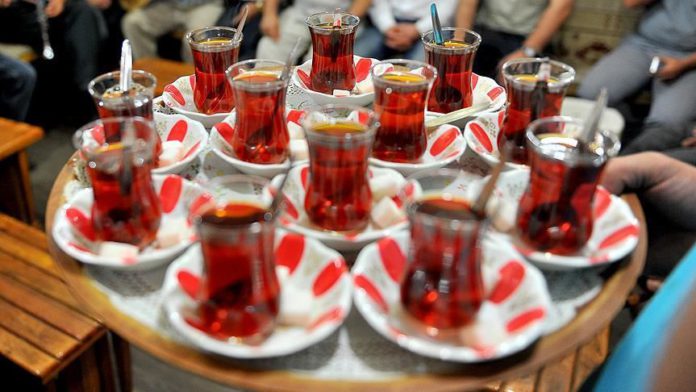 Enjoying a glass of tea is an indelible part of Turkish culture, as whether at home, in the office, or even during shopping, hot glasses of the traditional brew are regularly on offer.

Turkish people have long since proven their love for tea, but last year made it official, when they became the world’s top tea-drinking country. To be exact, the average Turkish person consumes around 1,300 cups of tea a year, far above the international average.

As the world marks the first-ever International Tea Day on Thursday, Anadolu Agency focuses on the tea production culture in the country, which was introduced surprisingly not long ago, but in the days before the foundation of the Turkish Republic in 1923.

Mehmet Erdogan, deputy chair of the Istanbul-based TurkCayDer, an umbrella group of Turkish tea producers, told Anadolu Agency that although tea entered the daily lives of Turkish people relatively late, it became a traditional and national drink in quite short order.

“Tea culture, as a symbolic part of common life and hospitality, created a great ethnographic and intellectual richness,” Erdogan said.

“Tea has become a symbol of Turkish friendship and hospitality,” he added.

“The Day will promote and foster collective actions to implement activities in favor of the sustainable production and consumption of tea and raise awareness of its importance in fighting hunger and poverty,” the UN said on its website.

Seen as the world’s most-consumed drink after water, tea is believed to have originated in northeast India, north Myanmar, and southwest China although the exact place where the caffeinated plant first grew is unknown, according to the UN.

“Tea has been with us for a long time. There is evidence that tea was consumed in China 5,000 years ago,” according to the UN’s website.

In Turkey, today around 1.5 million tons of green tea leaves are harvested annually and processed in 216 different tea processing factories.

A total of 170 of those factories belong to the private sector, while the remaining 46 are public institutions, according to Erdogan, who also chairs the commodities exchange in Turkey’s Black Sea tea hub of Rize.

The total production of tea is around 280,000 tons per year, as Turkey is the fifth-largest tea-producing country in the world, he added.

As the vast majority of the total production meets domestic market demand, less than 2% of it is exported, Erdogan said.

“The Turkish tea market is the third-largest worldwide, after China and India,” he added.

Turkey also ranks seventh in the world in terms of the area of its tea cultivation fields.

“Compared to other tea-growing regions in the world, the most important feature of the region is that the climate of the Eastern Black Sea Region doesn’t allow the development of natural tea pests,” he explained.

“In the region, more than 205,000 producers are engaged in tea agriculture, and it is government policy to protect these producers with high import taxes of 145%,” Erdogan said.

While around 65% of tea consumed in Turkey is also made in Turkey, he said that bulk tea is sold in small quantities, as they usually sell tea by packaging under individual brands.

“Tea is also widely consumed in our country in public places such as coffee shops, hotels, restaurants, making up 45% of total sales.

“Most cafes and restaurants serve a large variety of tea, including imported ones from all around the world,” he added.

A two-part teapot is traditionally used for Turkish-style brewing, with a smaller teapot, made of steel or porcelain, resting on top of a larger one.

The tea is steeped for 12-15 minutes. At the end of the brewing process, the tea is presented in small hourglass-shaped tulip-formed tea glasses as light or as strong as desired.

Traditionally it is served blood-red and without sugar.

Sugar is added upon request, but it is preferable to drink it without sugar to more fully enjoy the tea’s flavor.

The ideal duration of brewing is 15 minutes. Tea is best consumed within an hour.