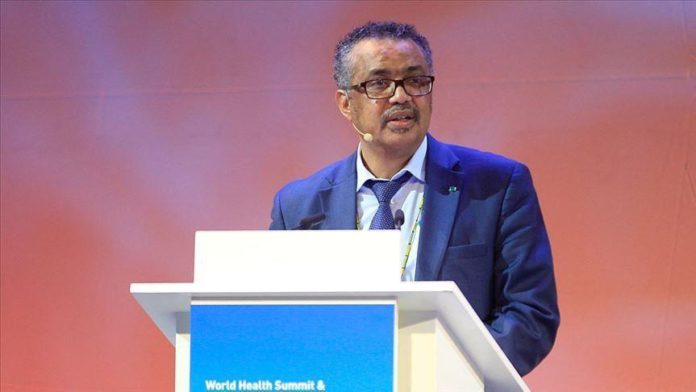 There is an alarming increase in COVID-19 cases and deaths worldwide, and cases each week have nearly doubled over the past two months, the World Health Organization chief said on Friday.

WHO Director-General Tedros Ghebreyesus was addressing a top-level virtual meeting held under the theme: A vaccine for all. The meeting was also attended by Ngozi Okonjo-Iweala, the World Trade Organization chief, and UN General Assembly’s President Volkan Bozkir.

Tedros said Friday’s meeting was timely as the world has the tools to end this pandemic, but it is also facing a worldwide resurgence.

“There is an alarming increase in cases and deaths around the globe. The number of new cases per week has nearly doubled over the past two months,” he said.

“This is approaching the highest rate of infection that we have seen so far during the pandemic,” he added,

As of Friday, WHO had confirmed almost 139 million cases of COVID-19 and just short of 3 million deaths worldwide.

The WHO chief cited several reasons, including rapidly spreading variants, the inconsistent use and premature easing of public health measures, the understandable fatigue of populations with social restrictions, and the dramatic inequity in vaccine coverage.

Challenge of our times

“Vaccine equity is the challenge of our time. And we are failing,” warned Tedros.

He said that more than 832 million vaccine doses had been administered globally, but over 82% have gone to high- or upper-middle-income countries, while low-income countries have received just 0.2%.

“The inequitable distribution of vaccines is not just a moral outrage, it is also economically and epidemiologically self-defeating.”

Avoid mistakes of past

The WHO chief said the world could not repeat past mistakes, such as when HIV emerged 40 years ago, lifesaving antiretrovirals were developed, but more than a decade passed before the world’s poor got access to HIV treatment.

When the H1N1 pandemic erupted 12 years ago, vaccines were developed and approved, but the pandemic was over by the time the world’s poor got access.

“It is for this reason that WHO and our partners created the Access to COVID-19 Tools Accelerator and the COVAX vaccines pillar to prevent the same thing from happening again. We shouldn’t make the same mistake,” said Tedros.

He said COVAX works, and it had distributed vaccines to 110 countries and economies.

“But nowhere near enough. By now, we had expected to distribute more than 100 million doses, but so far, we have only been able to distribute 40 million,” said the WHO head.

Some countries expecting to receive vaccines through COVAX have not received anything, and none have received enough.

Some countries are not receiving their second-round allocations on time, jeopardizing their plans for delivering vital second doses.

More funding is needed, but money will not help if there are no vaccines to buy.

“We know that some countries and companies plan to do their own bilateral vaccine donations, bypassing COVAX for their own political or commercial reasons,” said the WHO chief.

“A scarcity of supply is driving these bilateral agreements, which only increases vaccine inequity,” he added.​​​​​​​