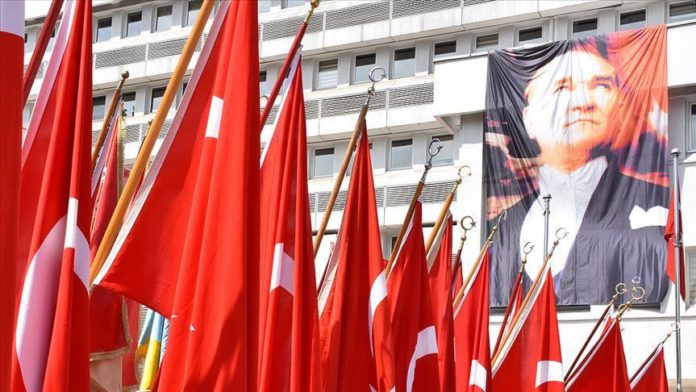 The world congratulated Turkey for its 97th anniversary of Republic Day.

“On my own behalf and on behalf of the people of Azerbaijan, I extend my heartfelt congratulations and best wishes to you and all the people of your country on the occasion of October 29 – Republic Day,” said Azerbaijani President Ilham Aliyev in a letter to Turkish President Recep Tayyip Erdogan.

“It is with great pleasure that we always follow the achievements of the Republic of Turkey and rejoice in its success as much as in our own,” he added.

Touching Turkey’s support for Azerbaijan in the Azerbaijan-Armenia conflict, he said “Your unwavering support to our right cause is a clear example of our solidarity and is very valuable to our people. Azerbaijan, in turn, also stands by brotherly Turkey on all matters.”

Pakistan’s president and prime minister on Thursday congratulated the people and government of Turkey on their 97th Republic Day.

“It gives me immense pleasure to convey my heartfelt felicitations to the Government and the brotherly people of the Republic of Turkey on the occasion of the 97th Republic Day,” President Arif Alvi wrote in his letter addressed to Turkish President Recep Tayyip Erdogan

Alvi said the fraternal relations between the people of Pakistan and Turkey go back centuries and are embedded in a common religion, shared culture, linguistic and spiritual heritage.

“Time and again, our two nations have proven that they will not desist from any sacrifice in defense of each other’s freedom,” the Pakistani president said

He also reaffirmed Pakistan’s historic solidarity with Turkey and said the two brotherly countries will continue to stand shoulder-to-shoulder in the years to come.

Prime Minister Imran Khan also congratulated the people and government of Turkey on their Republic Day.

“On behalf of the people and government of Pakistan, and on my own behalf, I wish to convey our heartfelt felicitations to the brotherly people and Government of Turkey on the auspices occasion of Turkey’s 97the Republic Day,” Khan wrote in his letter to the Turkish president.

Citing the strong historic ties between the countries, Khan said: “The people of Pakistan and Turkey remain bound in a historic brotherhood that goes back centuries. Our two peoples have stood by each other in all times of need and continued to carry on this glorious tradition to this day.”

“We are proud of the support that our ancestors extended during the Turkish War of Independence. The people of Pakistan were also deeply moved when Your Excellency equated Kashmir with Canakkale during the address to Joint Session of our Parliament in February 2020,” Khan further said.

The Pakistani premier assured that his country would further deepen its strategic partnership with Turkey.

“On the anniversary of the #RepublicDay, we convey to #Turkey and its people our heartfelt wishes of health, prosperity, and resilience! Romanian flag and a Turkish flag are tied by multiple common interests, both as #Allies and as #StrategicPartners,” said Romania’s Foreign Ministry in a tweet.

“I sincerely congratulate my friend and my counterpart Mr. @MevlutCavusoglu and the Turkish people on the occasion of The Republic of Turkey and wish them prosperity, success, and health in this difficult process,” said Lithuania’s Foreign Minister Linas Linkevicius on Twitter.

Iran’s Ministry of Foreign Affairs said “On the occasion of the Republic Day of Turkey, we send our warm greetings to the people and the government of Turkey. The long-lasting friendly relations, between our two countries, have proven resilient and we are willing to further expand our bilateral ties,” on Twitter.

“On the occasion of #Turkey’s 97th anniversary of the #RepublicDay, we extend to our Turkish friends the best of wishes for continuous prosperity and welfare. The friendship between Albania-Turkey is constantly developing into higher levels of cooperation,” said Albania’s Ministry of Europe and Foreign Affairs in a tweet.

Also, Latvia’s Foreign Ministry said on Twitter that “Congratulations and best wishes to the people of #Turkey on the 97th Anniversary of the Proclamation of the Republic!”

Millions of Turks across the country and abroad are celebrating on Thursday the 97th anniversary of the proclamation of the Republic of Turkey.

Mustafa Kemal Ataturk, the Republic’s founder, on Oct. 29, 1923, officially declared the name of the nation and proclaimed the country’s status as a Republic.

Since then, Turkey celebrates Republic Day every Oct. 29.