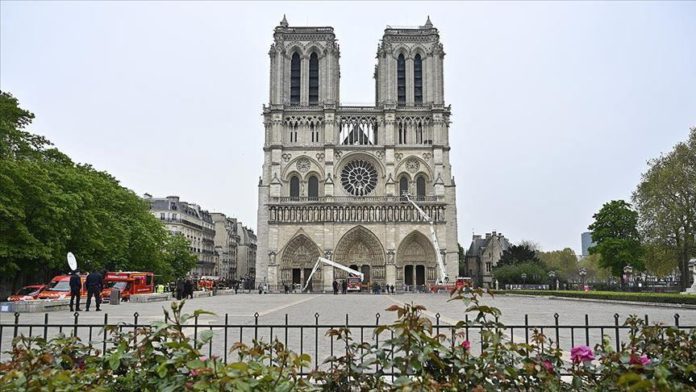 Workers at Notre Dame on Monday began dismantling scaffolding that melted onto itself during a massive fire in April last year which almost consumed the beloved cathedral.

The work involves taking out 40 tons (88,000 pounds) of fused metal to be removed without damaging the stone vaults around it. It was these vaults that prevented the fire from moving down and into the main body of the building.

The fire occurred on April 15, 2019, starting in the cathedral’s roof where restoration had already begun.

It is thought that faulty equipment was the cause of the blaze. Some 400 firefighters battled no less than an inferno for three and a half hours that nearly took down the 11th-century church.

To the horror of onlookers, the fire tore through the roof and destroyed the church’s notable Gothic spire, only coming under control in the early morning hours.

A mass of some 40,000 tubes were evaluated today by workers who were taken by lift into the twisted material. Later this week, additional workers will be lowered by ropes from a crane to dismantle the scaffolding.

“In an operation like this, it’s like preparing a rocket launch, with final ‘check-up’ before the rope access workers,” said Christophe Rousselot, the director general of the Fondation Notre Dame, the charity that oversees the collection of donations to the cathedral.

Metal scaffolding had been in place at the time of the fire, there to hold up the rafters, which quickly turned to 300 tons of molten lead. Combined with the charred wood roof, it has made for mounds of debris that workers have been sifting through over the past year. The lead pollution also fell on a vast amount of the surrounding area.

Notre Dame has remained shuttered since the fire, with masses held at various surrounding churches. This year, its forecourt re-opened to the public on the seventh Sunday after Easter, known as the Christian holiday of Pentecost.

Shortly after the fire, French President Emmanuel Macron declared that it would take only five years for the extensive repair work to be completed. His declaration caused experts and non-alike to scoff at the notion, saying the estimate was far too optimistic. Priceless artifacts and the cathedral’s interiors are in need of cleaning and repair, which has been calculated by historians at ten years time.