TurkishPress
Home News Without Serbia, there is no integration of Balkans into EU: Hungarian premier 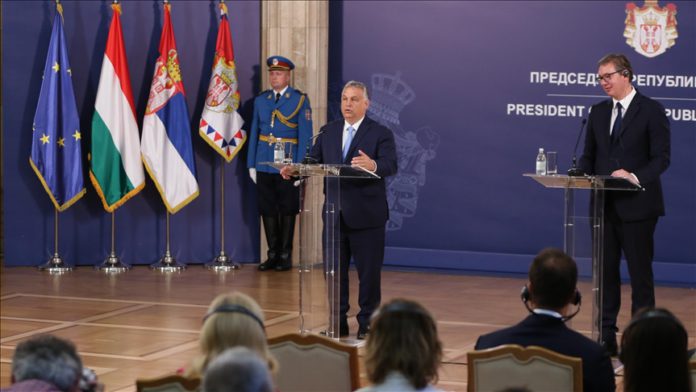 Serbia is the key to the region’s stability, and until it is integrated into the European Union, the Western Balkans will not be integrated, Hungary’s prime minister said Thursday.

Orban said every region has a central country, just as Poland was at the time that Hungary was on its way to the EU.

“Every region has a central country. It does not affect the sensitivity of other countries. That is why I unequivocally support Serbia and its path to the EU. Until Serbia is integrated, the Western Balkans will not be integrated,” he underscored.

According to Orban, the EU should understand that Serbia is currently more useful to the EU than the EU is to Serbia and that if the bloc does not accept new impulses and new members, then it will step in place and will fall apart.

“The key to the stability of the region is Serbia,” he added.

Vucic meanwhile said that relations between Serbia and Hungary are absolutely the best in history.

“I would like to thank you for your role in the region of the entire Western Balkans. Hungary’s role is extremely stabilizing almost all Western Balkan countries, including Serbia, but also everyone else because we all see you as a stabilizing factor,” he said.

Orban’s visit to Serbia comes as he continues his campaign to promote his vision for the future of the European Union.

On Tuesday, an advertisement in the German tabloid Bild called for Serbia to be admitted to the bloc.

The Hungarian government also published a six-point critique of the current state of the EU with a seventh point backing EU membership for Serbia.

Hungary’s strategic interest in Serbia relates to its big diaspora in the northern Serbian province of Vojvodina.

Parties representing the ethnic Hungarian minority in Vojvodina have been the catalyst for improved relations between the two countries.

Coronavirus tally rises to 840 in Russia