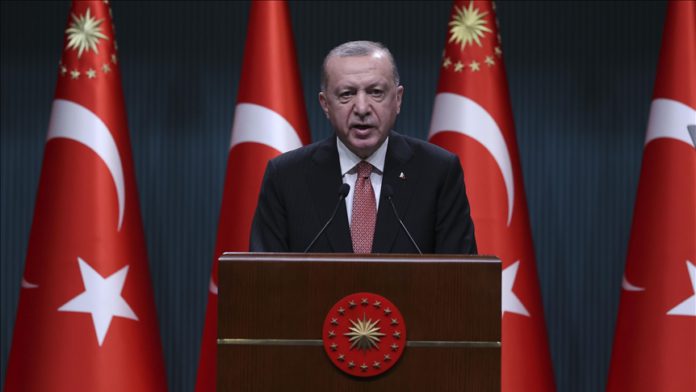 Amid a nationwide fall in COVID-19 cases, Turkey is set to end pandemic curfews as of next Thursday, July 1, the country’s president announced on Monday.

That same day Turkey will also lift intercity travel restrictions and restrictions on urban public transport, said Recep Tayyip Erdogan after a three-hour-plus Cabinet meeting at the presidential complex in the capital Ankara.

Thanks to the drop in virus cases, Turkey will return to normal working order in public institutions and organizations as of July 1, he told reporters.

The country on Monday reported 5,294 new coronavirus cases, including 429 symptomatic patients, as well as 51 new fatalities and 5,093 recoveries over the past 24 hours.

On June 1, Turkey eased some measures to fight the virus as the number of virus cases in the country dropped following a 17-day lockdown.

Erdogan also stressed how “vital” it is for everyone to get jabs when their turn comes in the country’s vaccination drive.

Urging the public to pay no heed to “manipulations,” he said they should instead listen to scientists and doctors about the need for vaccinations.

“Our goal is to make everybody in our nation over age 18 eligible for vaccination within a few weeks,” he said.

Erdogan stressed that Turkey is the country that has administered vaccine doses to the largest share of its population over the last week.

On relations between Turkey and the US, Erdogan said the two countries are ushering in a new era on a “positive and constructive basis” following last week’s meeting with US President Joe Biden during a NATO summit in Brussels.

Turkey is determined to transform the “beautiful climate” achieved with Biden into maximum benefit for both countries, he added.

“Turkey’s only demand is respect for its sovereign rights in all political and economic areas and support for its fight against terrorist groups,” said Erdogan.

Following the meeting, Biden said he had a “very good meeting” with his Turkish counterpart.

The one-on-one meeting at NATO headquarters lasted for 45 minutes – the first time the leaders met since Biden took office this January.