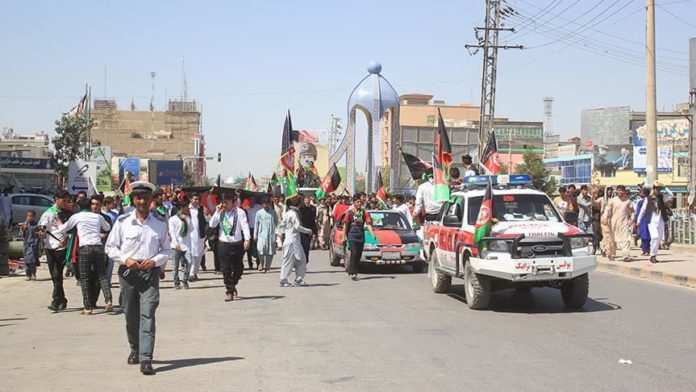 At an historic crossroad with optimized hope for peace, Afghanistan is marking its 101st Independence Day on Tuesday.

The country of some 35 million, situated on the crossroads of South and Central Asia, has been going through a turbulent period for the past four decades. However, the relative peace in past 19 years and the rejuvenated yet fragile peace process have evoked hopes for a prosperous future there.

Generation born and raised in war

As a classic example of an Afghan born and raised in this period, 39-year-old Anwar Khan Sadaat remains optimistic for the raging conflict to end within his lifetime. “I do not remember anything but war in my lifetime, but my grandmother keeps telling us stories of the glorious past that never lets our hope for a peaceful future die,” the roadside fruit vendor in the capital Kabul told Anadolu Agency.

Saadat’s grand-uncle was among the first parliamentarians when the last emperor, King Zahir Shah, introduced a new constitution in 1964 switching the country to modern democratic state with civil rights. The subsequent events following the pro-Soviet military coup in the late 1970s, however, had its toll on him just like millions of other Afghans who were killed, wounded and migrated.

“By selling these (fruits) I barely survive, me, my wife, children, the family of my martyred brother [Saadat’s elder brother were killed while serving in the Afghan army six years ago] and my grandmother. I have three children, all girls, I want them to complete education, and go on to serve the nation under peace,” Sadaat said as he delicately arranged an array of fresh grapes, apples, and other fruits on his cart, with the tricolor flag of Afghanistan hoisted on top, to attract buyers.

Earlier this month, at an extraordinary moot “Loya Jirga”, the grand consultative assembly of Afghan elders with over 3,000 public figures from across the country, lend their weight behind the government’s call for a permanent cease-fire and the release of Taliban prisoners with international guarantees that the insurgents would not resort to violence again and commence intra-Afghan talks.

Among organizers of Loya Jirga, Tair Zaland told Anadolu Agency the ground is paved in an “unprecedented way” for eventual peace in the country. “More than ever, we are closer to an ultimate peace with the public consensus nationwide, the three cease-fires we had in past three years and almost completion of the prisoners’ swap,” the nearly dressed Afghan diplomat with a clip of tricolor Afghan flag on his coat said while stressing this opportunity must be seized.

The release of 5,000 Taliban prisoners in return of 1,000 captive security forces was agreed in a landmark deal between Washington and the Taliban in February as a condition for the intra-Afghan talks to begin.

Throughout its recent and classic history, Afghanistan’s strategic location on the crossroads between Central and South Asia has played pivotal role in determining its fate.

Zaland agrees. “We [Afghans] as well as our neighbors can benefit greatly if our location is used for collective gains, connectivity for trade and cultural ties instead of proxy wars,” he added.

“The management of water and natural resources has been worst affected by the war. If we need to achieve and realize the wish of self-reliance, food security, there is a need to prioritize this sector,” he said. Akhtar has been occasionally visiting Kabul to share his knowledge and thoughts in this regard with students and relevant officials.

“The new lot of educated Afghan youth wish for their country at this 101st Independence Day that the war ends so that we can enjoy the natural beauty of all our provinces and enter healthy competition in various fields with all countries of the world,” he said.

This year, Akhtar said he will enjoy the Independence Day celebrations with his friends and relatives in Kabul.

Comparing the lavish public celebrations before the rages of war with current modest fiesta, Saadat said his grandmother always speaks fondly of King Shah inspecting the robust units of soldiers, the traditional “Attan Dance” and other festivities during this day.

“That all is no more around, but God is merciful, we will see peace and such public celebrations soon,” he said.