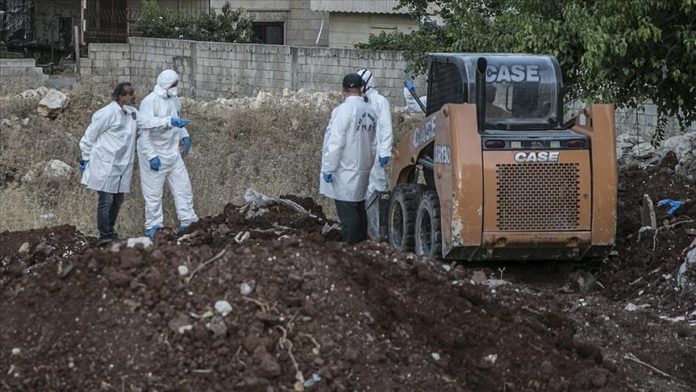 Twenty-six more bodies were discovered in Syria’s northern Afrin district, bringing the total number of victims exuded from the empty land occupied by YPG/PKK terrorists before the 2018 liberation to 61, a local Turkish official confirmed on Thursday.

“We announced the numbers yesterday, it was 35, but as of the morning, the toll increased to 61 and the excavation work still continues,”Rahmi Dogan, governor of the southern Hatay province, said at a commemoration ceremony on Democracy and National Unity Day, observed annually on July 15, the day of defeated coup in 2016.

The excavation began after receiving information that YPG/PKK terrorists had buried mass remains at an unused plot of land in the Afrin in January 2018, he said, fearing that the number of bodies removed from the mass grave could rise further.

Since 2016, Turkey has launched a trio of successful anti-terror operations – Euphrates Shield (2016), Olive Branch (2018), and Peace Spring (2019 – across its border in northern Syria to prevent the formation of a terror corridor and enable the peaceful settlement of residents.

In its more than 35-year terror campaign against Turkey, the PKK – listed as a terror organization by Turkey, the US, and EU – has been responsible for the deaths of nearly 40,000 people, including women, children, and infants.

In the past decade, around half a million people have been killed, and more than 12 million had to flee their homes.