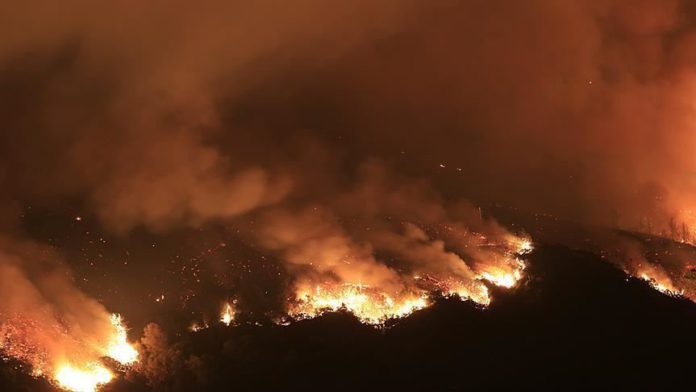 Strong winds may allow many fires to grow significantly in the US state of California, according to forest and fire protection officials, while its northern neighbor Oregon faces a massive risk from blazes.

The CalFire department said in a statement Wednesday it is close to containing many of last month’s fires, but several new wildfires were ignited and fanned by strong gusts that reach up to 55 miles (88.5 kilometers) per hour in mountain and foothill areas.

While approximately 14,000 firefighters were battling 28 major wildfires across California as of Wednesday, wildfires have burned over 2.5 million acres in the state since the beginning of this year, causing eight people to lose their lives and leaving over 3,700 structures destroyed.

The major metropolitan city of San Francisco saw the sky turn orange due to more than two dozen wildfires close to the Bay Area.

In California’s northern neighbor, the state of Oregon, Governor Kate Brown said wildfires in her state could lead to “the greatest loss of human life and property” in Oregon history.

“We’re in an unprecedented fire event. Several significant, growing fires across the state continue to spread due to hot, dry weather & high winds,” she said on her Twitter account.

Portland Fire and Rescue said it responded to over 500 since Monday, which is a sudden rise from a total of 152 responses in the previous three days.

Some experts point out to climate change and extreme weather conditions for the cause of hot and dry weather and strong winds, as more than 12,000 lightning strikes in August caused widespread blazes across California.

Temperatures rose about 1.8 degrees Fahrenheit (1 degree Celsius) in California while precipitation dropped 30% since 1980, according to research led by California-based Stanford University, which noted that this doubled the number of autumn days, when extreme conditions and risk of wildfires are at the highest level.

Total cost of wildfires is estimated to be more than $800 million so far this year, according to the US’ National Interagency Fire Center.