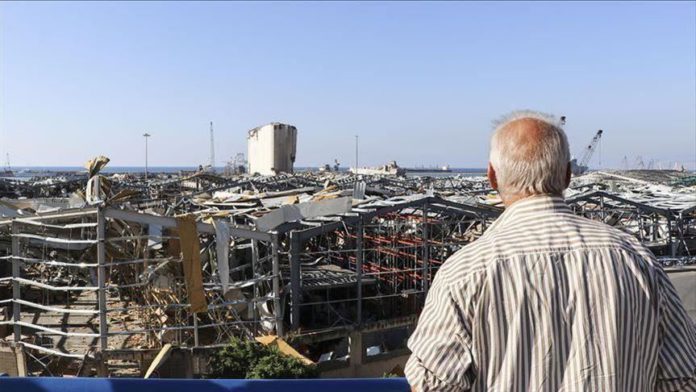 Longing for political change and better living conditions, the Lebanese people are trapped in a dark tunnel as Lebanon is still reeling without any prospect of ending the country’s economic crisis.

The Arab country has been suffering its worst economic crisis since the end of the civil war (1975-1990) as well as a deep polarization between political parties, giving room for regional and western powers to vie for interests.

Lebanon is still debilitated by the consequences of the civil war. This war ended with the 1989 Taif Agreement, which established a power-sharing formula based on quotas that divide the Cabinet portfolios between the three main components — Christians, Sunnis and Shias.

Last week, President Michel Aoun proposed scrapping the sectarian quota system as the country struggles to form a new government after the resignation of Hassan Diab’s cabinet in the wake of the Aug. 4 explosion at Beirut’s port.

Aoun’s proposal, however, could not provide leverage for Prime Minister-designate Mustafa Adib, who resigned Saturday after failing to form a new government.

During the government formation talks, the Shia Hezbollah and Amal movements insisted on keeping the Finance Ministry, which will have a big role in drawing up economic rescue plans, in the new cabinet.

The new government was also part of an initiative floated by French President Emmanuel Macron after the port explosion, which caused a massive destruction in the capital and killed 191 people and injured over 6,000 others.

“It is crystal clear that Iran does not wish for the success of the French initiative,” Makram Rabah, a history professor at the American University of Beirut, told Anadolu Agency.

Iran, which backs Shia groups in Lebanon, including armed movement Hezbollah, seeks to maintain the status quo in the country and use it “to put more pressure on the US,” Rabah said.

Lebanon’s political elite is accused by the public of serving their own interests while failing to carry out the necessary reforms to solve the country’s problem.

According to Rabah, the current development on the political scene also “shows this unholy alliance between Hezbollah and the entire political class that rejects the reforms.”

Disarming Hezbollah “is not on the table yet,” the Lebanese academic said. “But what can actually get us there is a restoration of the sovereignty of the state.”

Rabah went on to assert that “the monopoly of weapons is the only way for Lebanon to regain its stability and to reconnect with its Arab milieu.”

Hezbollah’s possession of arms made it an influential force in the country, and Iran’s support to the Shia group has served Tehran’s interests while dragging Lebanon away from its Arab fold – especially Gulf countries, most of which see Iran as a direct threat to the region.

Hezbollah also shares the blame for the Beirut blast, with speculation that the explosion was caused by an Israeli airstrike on the group’s depots or that Hezbollah was deliberately hiding ammonium nitrate that caused the blast at a warehouse at the port to later use them against Israel.

Rabah believes that limiting the power of Hezbollah could contribute to the reform since it has become a power contesting the state’s sovereignty and forms a major obstacle to forming a genuine civil state in Lebanon, but surely it is one of many actions on the path of reform that need to be taken.

“The start of this long road begins with a refusal to distinguish between corruption and illegal arms,” the academic said, citing that the smuggling of weapons into Lebanon severely impacts the country’s stability and sovereignty.

Rabah said that disarming Hezbollah would also limit the influence of Iran in Lebanon, which could maintain a kind of political balance in the Arab country to help it attain close ties with Arab Gulf states as well as securing international financial support to the devastated economy.

“The international community should address the elephant in the room, Iran,” Rabah asserted.

However, the major responsibility for reform falls on the shoulders of the Lebanese people and “the international community cannot do anything if the Lebanese themselves stay dormant,” he added.