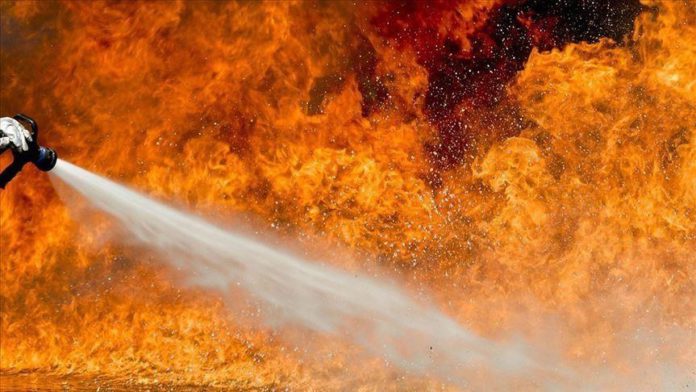 The year 2020 saw many massive wildfires and forest fires around the world, including the Australian bushfires which started last year and continued until March, while the US state of California was also hit by blazes that left many dead.

Here are the forest fires and wildfires around the world during 2020 compiled by Anadolu Agency:

– Australian bushfires continue in the new year with 20 dead thus far, including three volunteer firefighters. Around 6 million hectares (14.8 million acres) are left burned at the beginning of 2020.

– A state of emergency is declared for the Australian state of Victoria because of the bushfires in the south.

– Hundreds of thousands of native fish are estimated to have died in northern New South Wales, Australia as rains washed ash and sludge from bushfires into the Macleay River.

– Authorities declare a state of emergency in the Australian Capital Territory (ACT) as massive bushfires rage south of Canberra.

– A forest fire kills three forest officials who were caught in the blaze while trying to prevent fire in the Thrissur district of Kerala, India.

– Strong winds, blinding sandstorms and wildfires throughout the Canary Islands leave thousands of tourists stranded at the popular holiday destination, according to local media and officials.

– At least 5,000 koalas (12% of the population) die in Australia’s New South Wales state during the 2019-2020 wildfires, according to a study released by the International Fund for Animal Welfare.

– An estimated thousands of people in Australia die due to air pollution caused by recent bushfires in the country, according to a study by the Medical Journal of Australia.

– Two people, including a three-year-old child, are killed in a forest fire in Idukki, a district in the Indian state of Kerala.

– At least 19 people — 18 firefighters and a local forest farmer — die while battling a bushfire in Sichuan province in southwest China.

– A wildfire breaks out in the Chernobyl exclusion zone in Ukraine, with authorities saying two days later that it had been extinguished and radiation levels were normal.

– Forest fire rages on in South Jersey, US, where over 1,000 acres of land are burned, according to local media.

– Several wildfires break out across Scotland lasting a few days due to dry weather.

– Five species of birds in Australia — one critically endangered — have been negatively affected by unprecedented bushfires that raged across the country last summer, according to BirdLife International.

– Wildfires in the Florida Panhandle in the US force the evacuation of thousands from their homes.

– A forest fire breaks out in the Turkish Republic of Northern Cyprus (TRNC) coastal city of Girne as heat waves continue to grip the island.

– Thousands of people in Arizona are evacuated due to large wildfires.

– Forest fire breaks out at the skirts of Spil Mountain in Turkey’s Aegean province of Manisa.

– A forest fire breaks out in the Gelibolu district of the northwestern Canakkale province, Turkey, where “thousands of trees have become ash,” according to authorities.

– Four die in eastern Ukraine amid a forest blaze that injured nine others and destroyed 110 homes.

– Hundreds of children are evacuated from a summer camp in south-central Greece after a forest fire breaks out.

– Local authorities in northern China announce that a total of 21 conflagrations across the forests of the Greater Khingan Range were extinguished.

– Wildfires in northern California burn more than 23,000 acres over just a couple of days.

– In southern Greece, a wildfire torches homes and acres of forestland, forcing authorities to evacuate several villages in the area.

– An interim report on the bushfires in Australia earlier in the year reveals that the blaze killed or displaced nearly 3 billion animals in a period dubbed “Black Summer.”

– Firefighters and emergency personnel fight to control a wildfire in the Spanish capital Madrid, where several homes are evacuated.

– At least five people die due to dozens of wildfires roaring throughout northern California in the US.

– Approximately 800 households in six villages are evacuated in Turkey’s southeastern province of Adana, where fires engulfed an area of nearly 200 hectares.

– A total of 49 new wildfires are contained in California as the Pacific US state struggles to contain two dozen other larger conflagrations blazing over several weeks.

– Wildfires spread by gales continue to blaze in California and its northern neighbors as the death toll reaches 10, according to officials numbers.

– At least 33 people are killed in wildfires raging along US West Coast, according to multiple reports Sunday.

– Three people are killed and 1,200 residents evacuated in northern California as wildfires continue to burn in the state and its northern neighbors.

– At least 11 people are killed and 17 injured in forest fires in Ukraine’s eastern region of Luhansk.

– Wildfires continue to blaze in California as the state suffers double the previous areas burned.

– At least 10 people are injured in forest fires in Hatay province of southern Turkey, officials say.

– Firefighters and a legion of first responders in Tanzania battle a raging inferno on Mt. Kilimanjaro, posing a serious threat to the flora and fauna surrounding Africa’s highest mountain peak.

– More than 100,000 people are placed under mandatory evacuation as two wildfires rip through southern California.

– The Pantanal wetlands in Brazil burned at their fastest rate in October since record-keeping started in 1998, further damaging the country’s environmental credentials.

– Two people in Algeria are killed in forest fires west of the capital Algiers, according to authorities.

– Fresh wildfires in Nevada and California force the evacuation of over 1,000 people and kill at least one as strong winds feed flames.

– Bushfires raging across Fraser Island off the coast of Queensland, Australia, burn approximately 74 kilometers (46 miles), covering more than half of the 122 km long island.

– A forest fire in the Inebolu district of Turkey’s Kastamonu province is put out following 10 hours of firefighting.

– Dozens of Fraser Island residents are urged to evacuate their homes as the blaze advances east across the island.