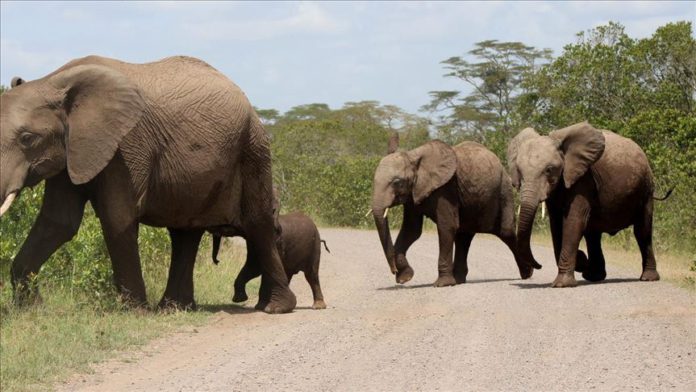 Alberto Lunga is mourning the death of his uncle, who was trampled by an elephant on March 1 in Dingani village, a remote community 450 kilometers northwest of Zimbabwe’s capital Harare.

On the day, a herd of elephants got into the maize fields and damaged crops within a few minutes, prompting villagers to come out to scare them away.

“An agitated bull charged towards me and my uncle and we ran for our lives, however the elephant caught up with my uncle who was running slowly.

“The elephant hooked him with its trunk and threw him onto the tarred road two meters away. A speeding car was just passing at that moment and it hit my uncle, killing him on the spot,” Lunga narrated.

The elephant still went on to crash the lifeless body until it was tired, he said.

In a separate incident, Thomas Mupusa, 43, an employee of Zimbabwe National Railway (ZNR), was mauled by lions on May 5.

In Malonga village, which is very close to Dingani village, a baby dropped from her mother’s back was picked by some marauding lions. The mother was protecting her livestock in a farm.

“By the time help came the baby had died,” said Naison Shoko, a villager in Malonga.

Shoko added that the villages are on the boundary of Hwange National Park and are only separated by a tarred road.

Deaths and injuries due to wildlife attacks have been reported from areas close to Hwange National Park, Kariba town, Save Conservancy and Gonarezhou National Park.

Zimbabwe’s wildlife conservancies occupy 16% of the country’s total land since the wildlife population has increased exponentially.

Police issued a warning to the general public to be cautious after a truck driver was attacked by a lion in Kariba on May 26.

“A truck driver is receiving treatment at a local hospital after he was attacked by an elephant […] We urge members of the public to be observant to avoid attacks by wild animals,” said a statement issued by the police.

According to the police, wild animals have killed at least 24 people and injured 21 others in Zimbabwe since the start of this year.

Elephants, lions, buffalos, hippos, leopards and rhinos are said to be most dangerous animals in Zimbabwe.

The figures show that wild animals have killed more people in Zimbabwe than the novel coronavirus. The country has so far reported only four deaths from COVID-19.

According to the Zimbabwe Parks and Wildlife Management Authority, resource competition between growing human and wildlife populations is a major cause of the conflict.

Carnivores also attack or kill livestock and humans, while herbivores raid crops leading to a conflict with humans as they protect their belongings.

Tinashe Farawo, the spokesman of Zimbabwe Parks and Wildlife Management Authority, described the situation as “dire” owing to the population growth.

“Our land is not expanding, hence, there is some growing competition for resources leading to the loss of lives,” Farawo explained.

“We are very worried that we have recorded more deaths and injuries this year compared to the previous years, before we get into the dry season when more attacks are experienced,” he said.

Owing to population growth, humans are now encroaching into the wildlife territories, some have destroyed security infrastructure within the national game reserves hence animals can now stray into villages easily.

Zimbabwe decided to sell or cull part of its national herd of elephants, drawing resistance from animal rights activists.

In August last year, the Geneva-based Convention on International Trade in Endangered Species (CITES) denied Zimbabwe, together with its neighbors Botswana and Namibia, an opportunity to sell wildlife animals.

Noting the rise of the human-wildlife conflict, several communities near game reserves have formed conservation committees aimed at raising awareness amongst villagers as well as informing authorities of community challenges.

“Tikobane is a Nambian term that means ‘let’s share.’ We are saying let’s share our natural resources in order for people to be able to live with wildlife in harmony,” Ndlelende Ncube, the founder and director of the trust, said.

“Some of our people don’t know how to protect their crops and livestock. So we teach them how to do that […] it is our duty to train them on that too,” Ndlelende said.

From the inception of Tikobane in 2018 there has been a decline of deaths in the surroundings of Hwange National Parks.

“However this year the cases have increased and we are worried,” Ncube said.

US: Joe Biden's son Hunter says he is under tax probe