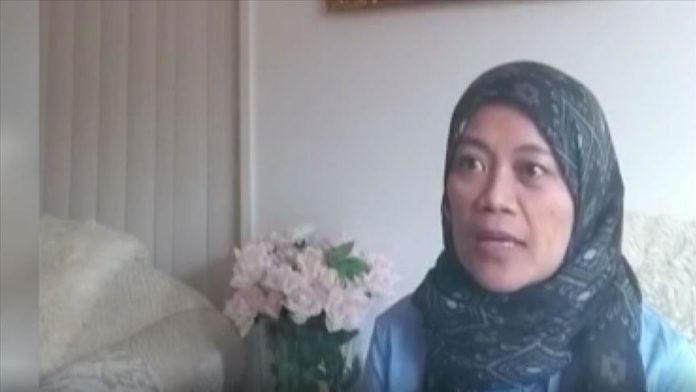 A wife of a victim of the New Zealand mosque attack thanked Turkish people for their support during the sentencing of the killer.

“I wanted to pay tribute to the Turkish people for their support throughout, especially those who attended his janazah [funeral] prayers in [Turkey’s capital] Ankara,” Singaporean Hamimah Tuyan, wife of Turkish-origin Zekeriya Tuyan, told Anadolu Agency.

Recalling the final hearing in the case, Hamimah Tuyan said: “Alhamdulillah, justice has been served. We prayed for this outcome, and now the terrorist has been sentenced to life imprisonment without the possibility of parole.”

Zekeriya Tuyan is one of the victims murdered by Brenton Tarrant, 29, a terrorist who admitted killing 51 Muslims in Christchurch as they were preparing for Friday prayers on March 15, 2019.

Tarrant was sentenced to life in prison without the possibility of parole in the first such ruling ever handed down in the country.

“And in New Zealand law, this is the harshest sentence and most appropriate for his crime. So, we made history,” she added.

Hamimah Tuyan underlined that no punishment can relieve the suffering of the relatives of the martyrs and the wounded, and noted that the world should act together against Islamophobia in order to prevent such incidents in future.

“Ertugrul Bey’s character and his strength, loyalty, bravery, sincerity, faith, and in my and our sons’ eyes, Zekeriya shared those qualities,” Hamimah Tuyan said, recalling her speech during the trial.

Hamimah Tuyan said, as one of relatives of the victims of the Christchurch attack, she will keep this incident on the agenda of the world, adding: “From now on, I will be the voice of my husband and continue his struggle.”

Speaking during the trial of Tarrant last month, Tuyan read a verse from the Holy Quran: “Whoever kills a person who does not commit manslaughter or corruption in the earth, it is as if he killed all people.”

“You killed 51 people. Behind them remained 34 wives, 92 children and over 100 siblings who had to endure the punishment of not being able to be with their loved ones,” she added.

“He was an imam for me, a protector, entertainer, problem-solver, peaceful and best friends. As my relatives asked me to say: he was Ertugrul,” she said at the court.

The verdict was announced after at least 91 “impact statements” were made by victims and their kin until the day of final hearing.

Tarrant had refused to make an oral submission before he was sentenced. He sacked his legal team last month and represented himself in court.

However, he instructed lawyer Pip Hall to speak on his behalf.

The sentencing of New Zealand’s “worst murderer” started on Aug. 25 with Justice Mander appointed for the hearing.

She also hailed the “strength” of the country’s Muslim community, who shared their thoughts in court during the hearings, adding that “nothing will take the pain away, but I hope you felt the arms of New Zealand around you throughout this process.”