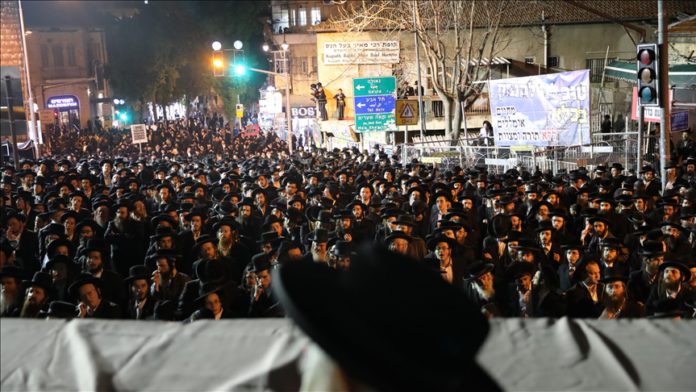 Ultra-Orthodox Jews, or Haredim, have come to the fore recently after staging a series of protests against measures taken by the Israeli government to stem the spread of the coronavirus pandemic in the country.

Haredim, who make up some 10% of Israel’s population, are accused of spreading the pandemic across the country as they refuse to comply with restrictions and take the COVID-19 vaccine.

On Feb. 9, Haredi Jews clashed with the police amid demonstrations against restrictions imposed by the authorities to combat COVID-19.

Last week, a car carrying Anadolu Agency news crew came under attack by Haredi Jews in West Jerusalem as the reporters were conducting a street interview in Mea She’arim neighborhood, where a large Haredi population resides.

In the interview, Anadolu Agency correspondents talked to some Haredi Jews about their views on the ongoing coronavirus measures and the vaccination campaign in the country.

Samuel Ben Hamo, a student in Yeshiva (a Jewish education center) told Anadolu Agency that he is against the virus restrictions.

Hamo noted that he does not believe in the official daily coronavirus figures announced by authorities, describing the figures as a “big lie”.

“They close all the places on our holidays such as Passover and Purim on the pretext of preventing the spread of the virus, but they allow 20,000 people to hold demonstrations in front of Israeli Prime Minister Benjamin Netanyahu’s house,” Hamo said.

Some others, however, noted that the majority of the Haredi community follows virus measures.

“More than 80% of the Haredi population comply with the coronavirus measures and receive the vaccine. The proportion of those who are against the measures and vaccination is less than 10%,” Samuel Deutsch, a bank manager in Mea She’arim, said.

Criticizing protests against the restrictions and clashes with the Israeli police, Deutsch said: “We must follow the instructions”.

Avi Moskof, another student in Yeshiva, said that most people in Israel believe in the existence of coronavirus, but people living in Mea She’arim do not believe in such a thing.

They hang banners that read: “the virus vaccine is very dangerous and anyone who receives the vaccine will die”, Moskof said.

“I am also a member of the Haredi community. The majority of them are careful about following coronavirus measures”, he noted.

The vast majority of ultra-Orthodox Jews refuse to join the Israeli army on the ground that they cannot fulfill their religious duties. Their opposition to military service often causes tensions with security forces.

Haredi Jews, living mainly in the cities of Jerusalem and Bnei Brak, do not accept the secular education system in the country and receive their education only in their own religious schools.

Pfizer, BioNTech clinch $1.95B vaccine deal from US