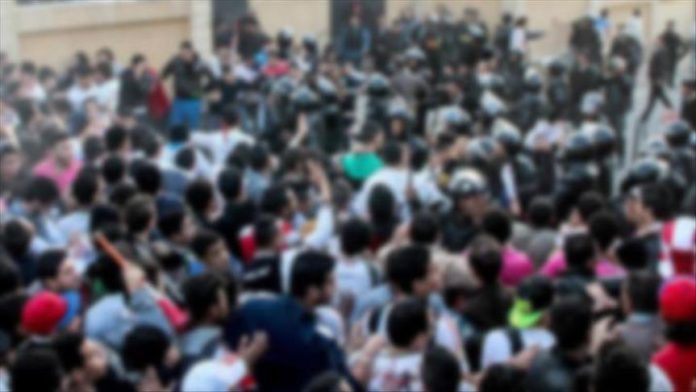 Attired in a local traditional loose shirt and baggy trousers, around a dozen students are sitting on a gunny woven jute mat in a small room, solving past papers as part of their preparations for the forthcoming matriculation examinations.

The room is a portion of a school for Afghan refugee children in Sohrab Goth, a Pashtun-dominated locality in the eastern district of the country’s commercial capital of Karachi.

The school, housed in a four-story building inside a residential apartment and staffed by 12 people, is one of the five primary and secondary schools for the refugee children residing in a nearby camp.

Nestled on the northern outskirts of Karachi, this run down locality with limited access to healthcare and basic sanitation, is home to nearly 250,000 Afghan refugees who were forced to flee their country due to a lingering conflict.

According to Syed Mustafa, who founded this school in 2005, around 60% of the children residing in the camp do not attend school. He migrated from the central Afghan province of Parwan following the US invasion in 2001.

“This is because of a lack of enough educational facilities, poverty, as well as indifference on the part of parents,” he told Anadolu Agency.

Over 350 students are enrolled in the school, 200 of being girls, mostly in junior classes. The girl students are studying free of charge, thanks to a couple of local NGOs and philanthropists.

There are around 2.8 million documented and undocumented Afghan refugees in Pakistan, making it the world’s second-largest refugee population after Syrians in Turkey.

Only around half of the refugees are registered, with the rest living without documents, mostly in the northeastern Khyber Pakhtunkhwa and southwestern Balochistan provinces, which border war-torn Afghanistan.

The southern Sindh province, of which Karachi is the capital, also hosts 500,000 Afghan refugees.

According to the United Nations High Commissioner for Refugees (UNHCR), more than 4.4 million refugees have been repatriated to Afghanistan since 2002, but many have returned to Pakistan due to ongoing violence, unemployment, and lack of education and medical facilities.

“Five schools for a population of over 250,000 are not even worth mentioning. These children are our future, but they are either forced to scavenge, work as child laborers, or just wander around to kill their time,” said Mustafa, warning that out-of-school children can be used for crime and militancy.

He was referring to intelligence reports, which suggest that many Afghan youths have joined local criminal groups, including drug peddlers. Many of them have reportedly joined the Afghan Taliban to fight against foreign troops and the Kabul government over the last decade.

“These uneducated and unguided children are like a ticking bomb. They can be troublesome for both Pakistan and Afghanistan if immediate steps are not taken to impart them education and other skills.”

But Saleem Khan, the chief commissioner for Afghan refugees, said the refugee children already have access to government schools across Pakistan, in addition to many skill development and scholarship programs for the youth.

“We are identifying the areas of higher demand in Afghanistan in order to train the (Afghan) youth. It will not only benefit them here, but they can also play a role in the development of their own country,” Khan told Anadolu Agency.

He cited distance, poverty, and to a certain extent conservative beliefs about female education as key reasons for a large number of Afghan children not attending schools.

Atmosphere not conducive to repatriation

According to the UNHCR, around 65% of the 1.4 million documented Afghan refugees in Pakistan are below the age of 25.

The UN agency, which is running several educational and skill development programs for refugee children and youth across Pakistan, believes that “they deserve to be educated and skilled for the future of Afghanistan.”

Besides its dedicated refugee programs, the UNHCR has been supporting the Refugee Affected and Hosting Areas (RAHA) initiative, which aims to mitigate the impact of the protracted refugee presence and promote social cohesion among Afghan refugees and their Pakistani host communities.

“Youngsters are the agents of change if an empowered and skilled young generation – both men and women – return to Afghanistan, they can better work for the restructuring of their country,” Qaisar Khan Afridi, a UNHCR spokesman, told Anadolu Agency.

He, however, acknowledged that the current security and political atmosphere in the war-torn country is not conducive to repatriation.

“The preferred solution to the refugee issue is voluntary repatriation. But since the ground realities do not support the goal of sustainable repatriation, chances are dim,” he said. “The return and reintegration need to be sustainable, otherwise refugees may either return or go to the western countries by using dangerous routes or indulge in negative activities.”

Afridi urged the international community to ensure security and development assistance, mainly in the areas of health, education, and employment to war-ravaged Afghanistan for the refugees’ sustainable repatriation.

Pakistan calls for Palestine with Jerusalem its capital