TurkishPress
Home News WHO failed to get virus-fighting data: US health chief 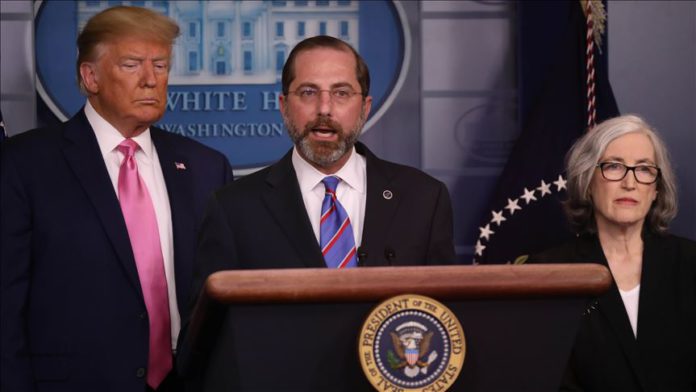 US Secretary of Health and Human Services Alex Azar accused the World Health Organization (WHO) on Monday of a failure to obtain information that the world needed to fight COVID-19 and said the “failure costs lives.”

Azar was speaking at the two-day World Health Assembly when representatives from the 194 countries that are members of WHO, are participating in the shortest-ever WHA, which usually lasts at least a week.

He said the United States launched the world’s first human vaccine trial and reported the first positive results from a therapeutic clinical trial.

“These successes and the transparent way in which we share them will benefit the whole world,” said Azar on the first day of the WHA.

He noted, “WHO’s operations must be transparent too, and we support an independent review of every aspect of WHO’s response to the pandemic.”

Azar said that “in an apparent attempt to conceal this outbreak, at least one Member State made a mockery of their transparency obligations, with tremendous costs for the entire world.”

“We saw that WHO failed at its core mission of information sharing and transparency when member states do not act in good faith. This cannot ever happen again,” said the US health chief.

Azar said that the WHO must change and become “far more transparent and far more accountable.”

On April 15, President Donald Trump said that the United States was halting funding to the WHO and accused it of being China-centric.

The US health secretary said Taiwan needed to participate as an observer at the WHA, “to bring the helpful perspective regarding their effective and exemplary response.”

“WHO barred Taiwan from participation in 2016 just a few months after Taiwan’s free and fair elections. The health of 23 million Taiwanese people should never be sacrificed to send a political message,” said Azar.

Such a move is likely to be opposed by China, which regards Taiwan as one of its provinces, although Taiwan has never agreed to be part of the People’s Republic of China.

Taiwan is a full-fledged democracy that can change governments through universal suffrage and has successfully fought against the novel coronavirus, but it is not a member of the United Nations.