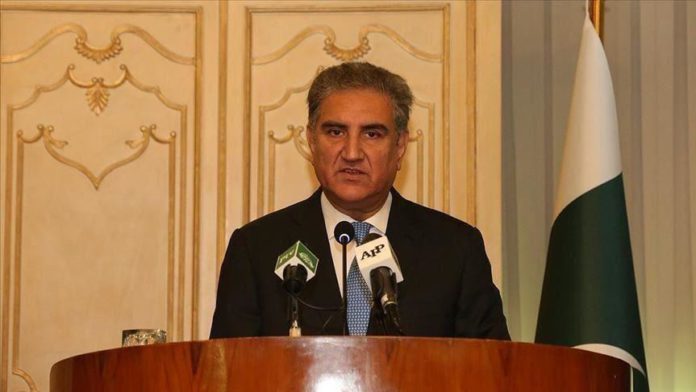 Pakistan on Tuesday urged the Organization of Islamic Cooperation (OIC) and the international community to act against growing Islamophobia in India and help stop attacks on Muslims in the country.

Foreign Minister Shah Mahmood Qureshi said he has written to the OIC chief and foreign ministers of all member states to take notice of India’s “campaign of Islamophobia” amid the COVID-19 outbreak.

“The extremist state in India has created & executed a campaign of Islamophobia, vilifying Muslims […] We cannot stand by and let another Gujarat [massacre of Muslims in 2002] happen,” Foreign Minister Shah Mahmood Qureshi said in a tweet along with a video message.

The COVID-19 outbreak has exacerbated Islamophobic attacks in India, with Muslims – who account for more than 14% of the country’s over 1.3 billion population – being targeted and accused of spreading the disease.

The anti-Muslim sentiment was spurred by Indian authorities and media blaming an Islamic missionary group, Tablighi Jamaat, for the spike in coronavirus cases in the country.

The situation has deteriorated to a point where hospitals in India have segregated patients based on religion.

“The world is fighting against coronavirus. What is required is a joint coordinated effort. Unfortunately, what we are seeing is that though this virus respects no borders, it does not differentiate between ethnicity or religion, yet … India … is in the grip of Islamophobia,” Qureshi said in the video statement.

“Hate speech is being practiced in India. Muslims are being discriminated against. They are not even being treated properly in hospitals. There’s a campaign not to buy from their shops and businesses. Their houses were and are being attacked.”

He said the treatment of Muslims in India was the consequence of the “discriminatory approach” of the Hindutva, or ultra-Hindu nationalist, the mindset of the ruling Bharatiya Janata Party (BJP).

“You saw discriminatory laws put into place. You saw the NRC law and the Citizenship Amendment Act enforced in India. This is of great concern – officials, government ministers have been indulging in Islamophobia,” he said.

The Pakistani foreign minister urged the OIC and the international community to “speak up as many in the Muslim world and the Gulf countries have spoken” against the inhuman attacks on India’s Muslim population.

“The OIC, foreign ministers, and the international community must take notice of this. This is a violation of UN Human Rights Council resolutions and it’s also a violation of many statements and positions taken by OIC. […] please taken notice of it and stop this attack on Muslims,” Qureshi concluded.

His appeal came just over a week after the OIC’s Independent Permanent Human Rights Commission (IPHRC) urged India to halt rising violence against Muslims in the wake of the coronavirus pandemic.

“#OIC-IPHRC condemns the unrelenting vicious #Islamophobic campaign in #India maligning Muslims for the spread of #COVID-19 as well as their negative profiling in media subjecting them to discrimination & violence with impunity,” it said in a series of tweets on April 19.

The group urged Prime Minister Narendra Modi’s government to “stop the growing tide of #Islamophobia in India and protect the rights of its persecuted #Muslim minority” following international law.

Meanwhile, an Indian External Ministry official declined to comment on the issue, saying the ministry may issue a detailed statement on Wednesday.

* Shuriah Niazi from New Delhi contributed to this story.