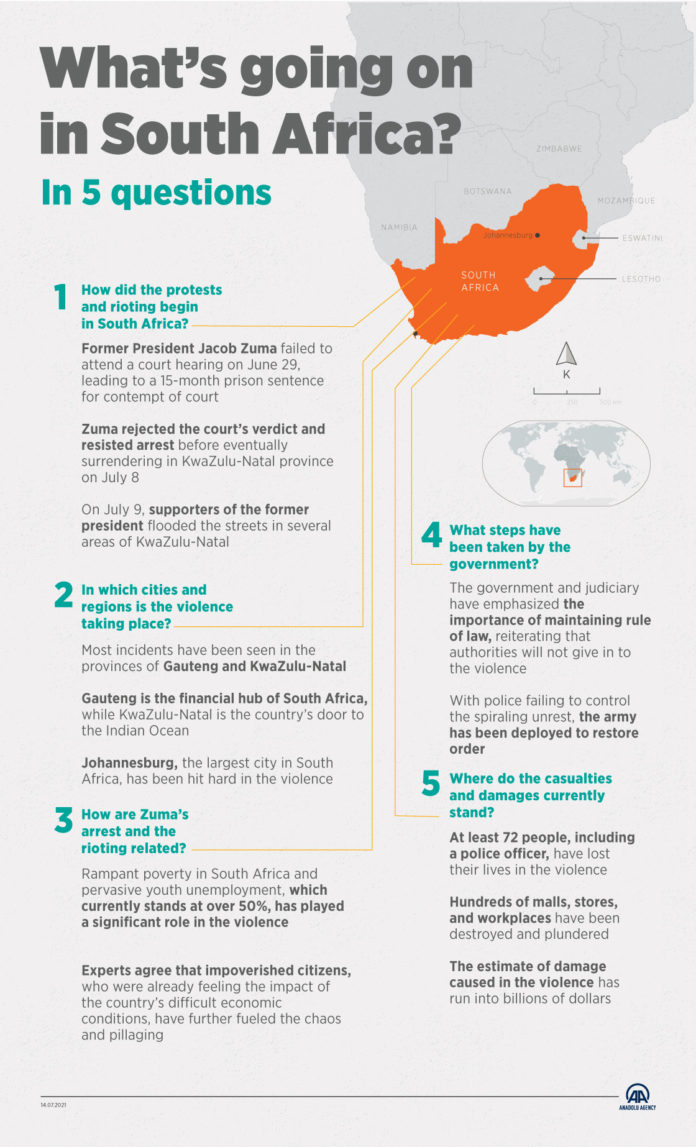 Tensions have been escalating in the Republic of South Africa, one of Africa’s most developed countries, due to ongoing violent protests and rioting since July 9.

Reacting to former President Jacob Zuma’s arrest, protesters showed their rage by pillaging workplaces and markets, rather than with slogans or banners.

The primary reason for the chaos in the country is thought to be an economic crisis that has impoverished its people as unemployment swells.

Here is a rundown by Anadolu Agency on the riots and the latest developments in the country:

1) How did the protests and looting begin in South Africa?

Former President Jacob Zuma, who is facing trial for as many as 16 crimes including embezzlement, extortion, fraud, tax evasion and money laundering, failed to attend a court hearing on June 29, leading to a 15-month prison sentence for contempt of court.

Not willing to surrender to security forces, Zuma resisted the court order for his arrest before eventually surrendering in the Nkandla homestead of the eastern KwaZulu-Natal province on July 8.

The following day, supporters of Zuma flooded the streets to protest his imprisonment. They looted 33 trucks before setting them alight on the same day in KwaZulu-Natal.

The first casualties took place during the looting on July 10.

Members of the uMkonto weSizwe Military Veterans Association, founded by retired officials of the ruling party of African National Congress (ANC), as well as some members of the Zulu nation, support the former president, known for his anti-Apartheid stance.

2) In which cities and regions is the violence taking place?

Currently, the provinces of Gauteng and KwaZulu-Natal are the scene of most of the looting and violence. While Gauteng is one of the most populous states and the financial center of the country, KwaZulu-Natal is its door to the Indian Ocean.

In Gauteng, the province’s largest city of Johannesburg is the center of the violence.

The looting has mostly taken place in low-income neighborhoods of the city and in the malls within townships — planned urban settlements allocated to Black residents.

In KwaZulu-Natal, most of the violence was seen in the cities of Durban and Pietermaritzburg, which host members of Zuma’s tribe and the Zulu nation.

The Muslim population in Durban was also targeted during the incidents.

Local residents in some regions responded to looters by forming armed forces. 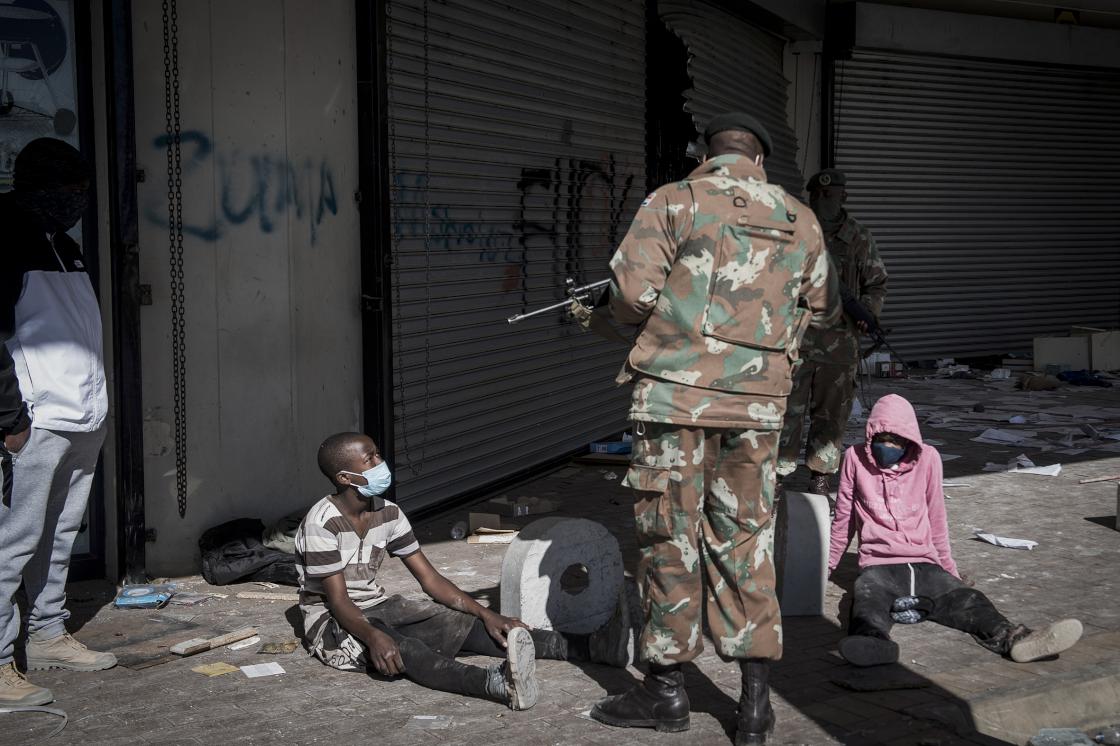 3) How are Zuma’s arrest and pillages related?

Demanding Zuma’s release, a group of his supporters started protesting in KwaZulu-Natal a day after his imprisonment.

Some in the Zulu nation, of which Zuma is a member, were enraged by news of the former president’s arrest.

Factors such as over-50% youth unemployment in the country, widespread poverty, and COVID-19 restrictions have also played a significant role in fueling the protests.

Some experts argue that many of the country’s impoverished joined the violence as a result of dire economic conditions.

4) What steps did the government take after the chaos?

Authorities have emphasized that they would not give in to the violence and that the law would run its course in the Zuma case that triggered the violent protests.

As the chaos grew on July 12, the ruling ANC urged for calm among the protesters. The same day, the government announced that the army would be deployed to support police.

President Cyril Ramaphosa underlined that the looting and violence would be faced down decisively.

Underlining the importance of the ruling on Zuma for the country’s democracy, Ramaphosa said the National Security Council would gather twice a day to coordinate all necessary measures.

After police failed to contain the incidents on July 13, the army marched on the streets in the township of Alexandra in Johannesburg.

5) Where do the casualties and damages currently stand?

At least 72 people, including a police officer, have lost their lives during the violence. As of July 13, a total of 1,234 people have been remanded into custody.

Hundreds of malls, stores, and workplaces have been looted in Gauteng and KwaZulu-Natal.

The estimate of damage caused in the violence has run into billions of dollars.

Losses due to the violence and looting are also expected to deepen the economic crisis, increase unemployment, and slow down the fight against the pandemic.