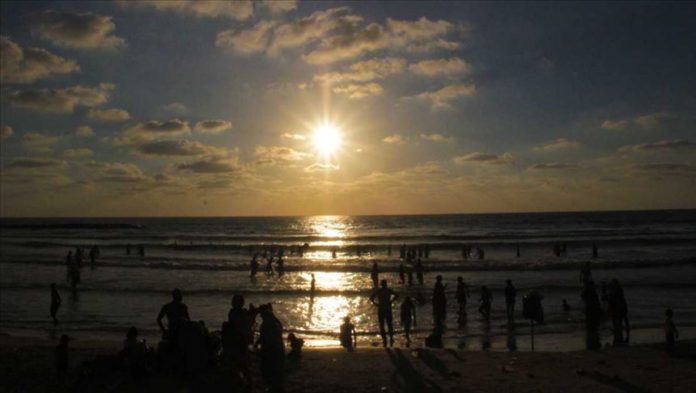 It took Palestinian Al-Qassam Budeir, a West Bank resident, some 30 long years to cover a distance of 60 kilometers (37 miles) to see the sea for the first time in his life.

For his ancestors, the beach was next door, just an hour away from their residence, before Israel put up restrictions and closed pathways to sea for the residences of West Bank.

It was a thrill for tens of thousands of Palestinians, who were allowed by Israeli authorities to go to Mediterranean beaches through security holes without entry permits. Nobody knows the reason behind the Israeli gesture.

Israeli military authorities also declined to comment on why they are allowing Palestinians to cross the barriers.

Al-Qassam who saw the beach first time had been detained many times in the Israeli jails. He is on the long list of people banned to travel outside West Bank along with his family because his father had participated in second Intifada in Sept. 2000.

“I took lot of photos and recorded all the moments. But the time passed quickly on the beach. I was fascinated by the water and sand,” he told Anadolu Agency.

“It was really surprising that the Israeli authorities opened the borders for the Palestinians in the West Bank,” said Mustafa al-Barghouthi, head of the Palestinian Initiative Movement.

This unpredictable Israeli gesture has initiated a debate about its motive.

“This move may be aimed to increase the spread of the coronavirus pandemic and make it out of control in the Palestinian territories, to weaken and exhaust Palestinians to divert their attention from annexation plans,” he added.

Many Palestinians say this amount to supporting the Israeli economy. They blame those, who spent their holidays on the beaches arguing that it will hit the investment projects in the West Bank in the wake of continuous health emergency in the region since the outbreak of COVID-19.

But others saw it a chance to see their lands the first time that their ancestors were forced to leave in 1948.

No stranger at the beach

Speaking to Anadolu Agency, Farah Qaym, 20, a photographer said she did not feel like a stranger on the beach. “This is the first time I saw the sea without undergoing humiliation checks at the Israeli posts,“ she said.

She further recalled that a man was telling his children at the beach to enjoy as much as they can, as they may not be able to see the sea again.

The economic situation in the West Bank has turned worse since the government is not paying salaries to public officials regularly, which drives them to choose cheaper recreation facilities.

According to Al-Barghouthi, a veteran politician, Israel wants to make some quick money from Palestinians and to show that the Palestinian Authority has no say. Further, it wants to show that Israelis only can decide about opening or closing the barricades.

“It is part of the process of the annexation plan and killing the project of two states solution. Nevertheless, we think that it is our life and the people have the right to reach the Palestinian cities inside,” he said.

While agreeing on some points made by the politician, Hani al-Masri, the head of Massart Research Center said the argument about Israel making quick money was far-fetched.

“Its impact is limited taking the size of the Israeli economy. Also, most of the West Bank people who visited had brought their food and other equipment. They spent little money in Israel”, he said.

“What explains this decision first and foremost is that the occupation feels secure, and we have not seen long-standing internal resistance,” he wrote in his article.

The Israeli authorities in the 1980s had offered economic sops to the Palestinians instead of political freedom. But that resulted in Intifada in 1987.

“These days Trump’s plan has adopted the same policy to promise economic improvement. But it is not separated from freedom,” said Al-Barghouthi.

“If they wanted us to have an economic improvement they would not take away our land, control 95% of our water and natural resources” he added.

There is also an argument that the move is an attempt to enhance the image of the Israeli military soldiers.

But the veteran politician said this argument does not hold much water as Israeli soldiers have been resorting to arresting, shooting, and killing people. Just a few days ago they have killed a young woman inside her house in Jenin.

As the local media reported about security holes near Ramallah, Tulkarem, and Hebron, Israeli soldiers on Wednesday closed Faroun hole near Tulkarm after skirmishes were reported in the area.