TurkishPress
Home Americas US & Canada What to know ahead of US’ Nov. 3 elections 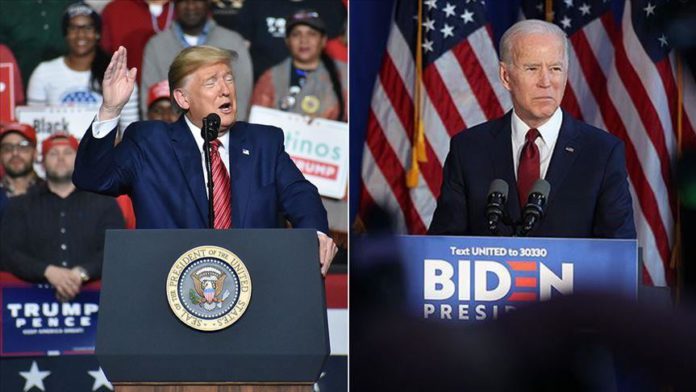 In 60 days, Americans will head to the polls to decide on granting US President Donald Trump four more years in office, or sending Democratic nominee Joe Biden to the White House.

But millions of voters are expected to cast ballots long before Election Day via the Postal Service as states seek to ensure citizens can participate in their core democratic duty amid the coronavirus pandemic.

The US has yet to emerge from its first wave of the outbreak and has tallied more than 6.1 million confirmed COVID-19 cases with nearly 190,000 deaths, making it the worst-hit nation.

Amid the outbreak, nine states and the nation’s capital have universal mail-in balloting wherein all voters will receive a ballot by mail.

Dozens of other states already had no-excuse absentee mail-in-voting in place, a system in which voters can request a ballot be sent to them.Those states will continue to institute the practice amid the pandemic ahead of the Nov. 3 polls.

Many states that allow early in-person voting will begin the process in September. Minnesota, South Dakota and Wyoming will be the first when they open early polling Sept. 18.

Depending on the state, early voting will continue through October and some will run until Nov. 2.

An unprecedented number of mail-in ballots are expected this year, and with the majority of states having a Nov. 3 ballot deadline, a victor may not be declared until after Election Day if the race is close.

Whenever and however voters choose to vote, they will be weighing in on a number of contests beyond the race for the White House that have far-reaching implications for the future of the country.

Not least are myriad congressional races in the House of Representatives and Senate that are pivotal in deciding the future of American policy.

In addition to seeking Trump’s ouster, Democrats are hoping to wrest control of the Senate from Republicans, and are widely expected to maintain a formidable hold in the House.

This year, Republicans are heading into elections with a 53-47 lead in the 100-seat Senate, but because one-third of the Senate is up for election every two years, they have far more seats at stake than their political rivals.

Republicans hold the vast majority — 23 of the 35 seats up for re-election in the chamber — while Democrats account for the remaining 12.

In all, Democrats would need to win three seats to make the chamber a 50-50 split, or four to command outright control.

That would be either Vice President Mike Pence if Trump wins re-election, or Senator Kamala Harris, Biden’s running mate. Pence and Harris are set to face-off Oct. 7 in the sole vice-presidential debate.

Biden and Trump will lock horns on the debate stage for the first time Sept. 29. They will do so twice more on Oct. 15 and Oct. 22.

But because the US does not have a direct democracy, it is altogether possible that the presidential winner could lose the popular vote, but win the White House, as Trump did in 2016.

Trump had 3 million fewer votes than Democratic nominee Hillary Clinton that year, but because he was able to carry critical battleground states, he won the election via the Electoral College.

The body has 528 electors that meet every four years to formally elect the president and vice president. Each state is apportioned a number of electors based on the number of representatives it has in the House and a two additional for the number of senators each state has constitutionally.

Nearly all states ensure their electors go to the victor of the majority vote in their respective state. Maine and Nebraska, however, have a far more convoluted system that goes down to the outcome in each congressional district.

A nominee needs 270 Electoral College votes to win the election, which Trump was able to secure four years ago despite lacking the majority of popular support.

Further down the ballot, Americans will also weigh in on a series of state and local matters in respective jurisdictions, and 11 states will hold gubernatorial elections.