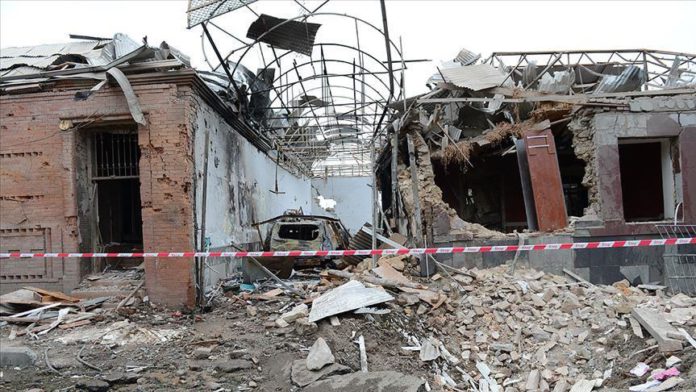 Since conflict escalated recently between Azerbaijan and Armenia in the occupied region of Upper Karabakh, or Nagorno-Karabakh, Iran has stood out with its contradictory statements on the dispute.

While Iranian officials say Upper Karabakh is an Azerbaijani territory and must be returned to the Baku administration, they deny claims that Tehran is providing arms aid to Armenia.

Footage that has been widely circulating on social media showing trucks allegedly carrying military vehicles and weapons from the Iranian border to Armenia has left the Tehran administration in a difficult position.

Last week, the deputy governor of Iran’s East Azerbaijan province, Aliyar Rastgoo, confirmed that brand new Kamaz trucks had been crossing the border to Armenia, though claiming the trucks were not carrying military equipment.

Iranian police have intervened harshly against demonstrations in many cities in support of Azerbaijan.

Though Azerbaijan has announced it will not halt military operations before liberating its occupied territories, Iran has called for an immediate cease-fire.

Further, Ali Akbar Velayati, a senior advisor to Iran’s Supreme Leader in international affairs, has blamed Turkey for the ongoing war that started due to Armenia’s provocations.

Velayeti claimed that Ankara “insists” on the conflict that came after three decades of Armenian occupation of Azerbaijani territory.

Relations between the two former Soviet republics have been strained since 1991, when the Armenian military occupied Upper Karabakh, an internationally recognized territory in Azerbaijan.

World has alarming increase in COVID cases: WHO chief