TurkishPress
Home News What is happening in Myanmar? 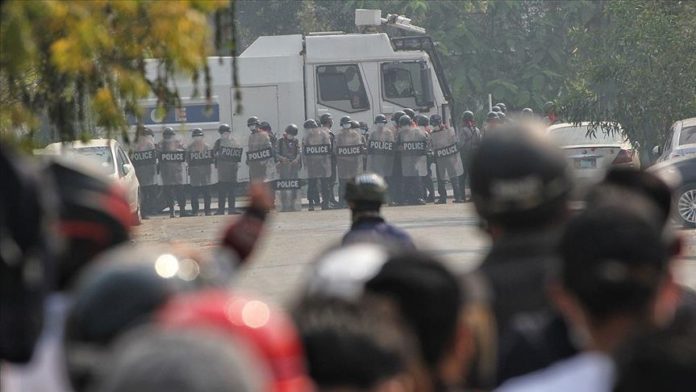 The rampage of military coup in Myanmar on Feb.1 was not surprising as the military generals had openly expressed resentment with the last November election results giving the National League for Democracy (NLD) a massive mandate.

Arrests of the NLD leadership and other civil society members by the junta government, however, could not break the nationwide protests in the Buddhist-majority country.

The iron hand suppression of the demonstrations has generated international sympathy with the demonstrators – 61 of them have died so far according to the watchdog Fortify Rights – after the junta forces opened fire on the protestors.

#WhatIsHappeningInMyanmar is trending worldwide on Twitter with calls for sanctions against the Myanmar military, officially known as Tatmadaw.

March 3 was the bloodiest day in the country as UN reported that the Tatmadaw regime killed 38 anti-coup demonstrators. More than 1,200 were detained.

The mass killings of protestors have been likened to China’s suppression of 1989 student protests at Tiananmen Square in Beijing. Locals have accused Beijing of backing the military generals in ousting the government of Aung San Suu Kyi. Protests were held outside the Chinese Embassy in the country.

Military Chief Min Aung Hlaing has assumed all state power and named new ministers to rule the government. The junta expressed no remorse for coup and has vowed to stand against any sanctions against the country.

The military regime occasionally shut down internet and social media sites while Facebook removed hundreds of pages linked to the military.

First mass protests were held in the capital Mandalay on Feb. 4 during which three were detained as anti-coup slogans were chanted.

Myanmar witnessed the biggest demonstrations on Feb. 7, first time since the 2007 Saffron Revolution — weeks long economic and political demonstrations triggered by removal of subsidies by the national government — which had led to easing of tightly held administrations in the country.

It was on Feb. 9 that the first casualty was reported when Mya Thwe Thwe Khaing, 19, was wounded after police opened fire on demonstrations where it also used water cannons and rubber bullets to break growing protests.

And two days later, the US imposed sanctions on Myanmar’s military generals, which was followed by a special session on Myanmar at the UN Human Rights Council.

However, it does not deter the junta which gives freehand to military forces to detain suspects or search private property without court approval.

In mid-February, the junta deployed military vehicles across major cities.

The injured woman died on Feb. 19, becoming the first protester to die in the anti-coup demonstrations.

In coming days, the crackdown on the anti-coup demonstrations increased.

On Feb. 28, 18 people were killed while dozens of others were wounded across the country.

On first day of this month, a third charge of alleged incitement that carries a maximum of two-year imprisonment was brought against Suu Kyi.

The Association of South East Asian Nations (ASEAN), of which Myanmar is also a member, sidestepped its role, referring to its non-interference in internal affairs of its members.

However, Indonesia and Malaysia called on the junta to free all political prisoners and stop the violent crackdown on anti-coup protesters.

Six journalists were also charged with violating a public order law that could make them face jail term up to three years.